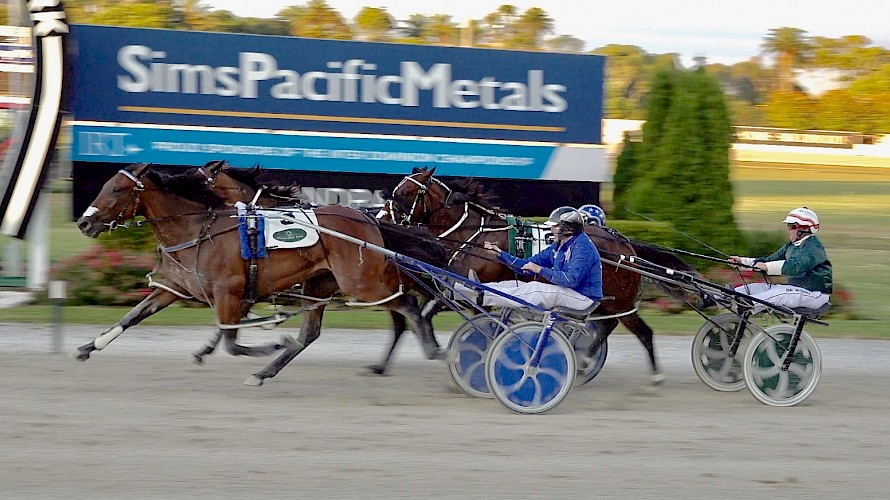 Copy That tries right to the line, tightened between Amazing Dream and Spankem at the finish of the Auckland Cup.

Maurice: Copy That oh so brave in the cup but he just wanted to keep charging

“He would have won it for fun if he’d led. Man he was brave.”

Driver Maurice McKendry’s summation of Copy That’s close third in tonight’s $196,000 Woodlands Auckland Cup only served to confirm that while he didn’t win, his was the run of the race.

Copy That’s chances of leading evaporated within the first 200 metres of the cup when, despite beginning well and holding Amazing Dream, he was crossed by Spankem with driver Natalie Rasmussen flapping the reins furiously at her charge.

Another 200 metres later McKendry found himself three deep on Copy That when Spankem handed up to Mark Purdon on stablemate Amazing Dream.

It looked curtains for Copy That when 400 metres further on a third All Stars’ runner Ashley Locaz whistled round and was gifted the top, relegating the Lincoln Farms’ star four deep.

The All Stars’ musical chairs continued soon after when Rasmussen came around again to retake the lead on Spankem, Copy That escaping being hopelessly hemmed in when Tony Herlihy eased Gambit, allowing McKendry to get out 2000 metres from home.

“When I got off the markers I tried to get him going as quietly as I could but he just wanted to keep charging,” McKendry said.

Despite having no cover for the final two laps, Copy That still dug deep in the home straight, going down by only a neck and half a length despite being squeezed up in the final stages by the two All Stars’ runners.

“I got tightened but I didn’t have to stop driving, I still had plenty of racing room,” said McKendry when approached by the stewards inviting the camp to view the film.

The merit of Copy That’s performance was underlined by the time winner Amazing Dream ran, the 3200 metres cut out in a sizzling 3:56.5, 2.9 seconds faster than Self Assured took to win the race last year. Only Dream About Me has gone faster in the cup, clocking 3:55.4 in 2016 when the race reverted to a standing 3200 metres.

Trainer Ray Green was amazed to see his little fighter come again at the finish, making ground on the first two in the last few metres.

“It’s just unfortunate he got hung out to dry so far from home. But there’s no doubt in my mind it was the run of the race.”

Green also marvelled at the rare recovery rate of Copy That. “He’s pulled up really well and will head next to the Flying Mile at Cambridge next Friday.”

Only after that race will Green and owner Merv Butterworth decide whether to have a shot at the A$1 million Miracle Mile at Menangle outside Sydney on March 6.

“He’d need to be winning at Cambridge. If he can’t beat then here, there’s no point in going over there to take on King Of Swing and the others.” 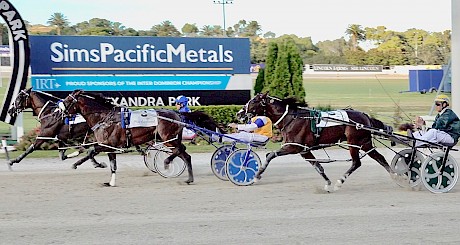 “Both horses have gone great. I was just hoping for better trips.”

Driver David Butcher was forced to drop back to the tail on American Dealer but made a big run round the field to park at the 900. While he fought doggedly in the straight, he had no answer to the All Stars’ pair Aladdin, who trailed before grabbing pacemaker Shan Noble by half a neck.

“David said he just flattened out the last 50 but he was entitled to do that,” Green said.