Lincoln Moonlight will only be fighting for the scraps at Kranji in Singapore tonight.

The Alamosa four-year-old lines up in the fifth race at 1.20am NZ time but anyone staying up to watch should expect to see Lim’s Zoom literally zoom away from his rivals, says trainer Shane Baertschiger.

That’s because on the clock he says Lincoln Moonlight simply can’t foot it with the Zacinto five-year-old.

When Lincoln Moonlight won two starts back in August he clocked a pedestrian 1:06.5 for the 1100 metres. And even though he improved on that last start, running 1:05.74 when second to smart debut winner Altair, it pales in comparison to Lim’s Zoom.

“He won in a sensational 1:04.57, which was nearly a track record, and he was three wide the whole way,” says Baertschiger.

“Lincoln Moonlight will go his usual honest race but it’s a strong field and, on form, we will be battling it out for second and third with four or five others.”

Lim’s Zoom, trained by Dan Meagher, was sold out of Bevan and Robyn Wilson’s Ashburton stable in June, 2107 after winning a Rangiora trial and with two wins and five placings from nine starts in Singapore has already earned S$127,485.

Lincoln Moonlight is not doing too badly either with one win and six placings from 10 starts for S$62,448.

But Baertschiger says he’ll find it harder now he’s in class four and he gives him a place chance only tonight. 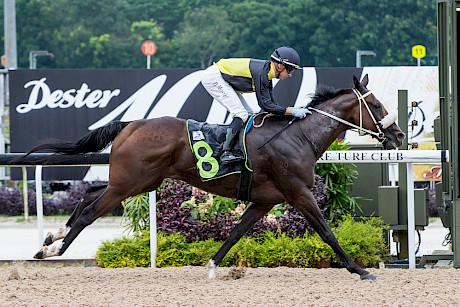 O’Reilly Bay races in blinkers for the first time and gets a more suitable distance. PHOTO: TriPeaksImagery.O’Reilly Bay improver for Sunday

Baertschiger lines up two horses for Lincoln Farms on Sunday in the 11th race at 10.55pm NZ time but O’Reilly Bay and Silent Prince are both well out of form.

“Silent Prince just hasn’t come up this time and he’s leaving for Malaysia at the start of November.

“But I’m expecting an improved run from O’Reilly Bay.

“He’s up to the right trip, 1600 metres, has blinkers on for the first time and has been working well.

“I think he’s got a win in him but he’ll be gone before the end of the year too.”

You can’t punt those two but Baertschiger likes his runner Kiss Your Song in the seventh race at 8.45pm.

The Your Song five-year-old has run second at each of his last four starts and drops a class on Sunday.