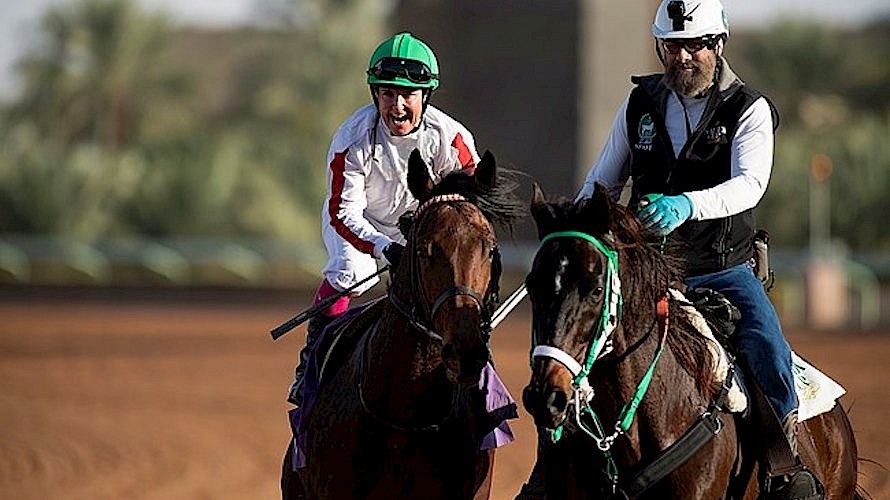 Lisa Allpress moments after becoming the first woman jockey to win a race in Saudi Arabia.

Allpress, 45, has just been recognised in this year’s New Year Honours, being made an Officer of the New Zealand Order of Merit for services to the racing industry.

And in Platinum Dubai she has a filly who is fleet enough to make every post a winner on the turning holiday track and add to her career tally of 1628 winners.

Allpress, who lies fourth equal on the jockeys’ premiership, appropriately made history in Dubai’s neighbouring Saudi Arabia earlier this year when she became the first female jockey to ride a winner at the international jockey series.

There won’t be any princes to congratulate her on Saturday but plenty of holidaymakers will be putting their dollars each way on Lisa Latta’s smart filly.

Owned by Neville McAlister and Lincoln Farms, the Pride Of Dubai three-year-old has the coveted inside draw for the 1000 metre dash.

With the addition of blinkers, Latta expects Platinum Dubai to be right in the fight all the way.

“She went a good race last time and she’s improved since then.”

Platinum Dubai had not lined up for 11 months when she raced at Otaki on December 18, racing on pace, challenging turning for home and only coming to the end of her run close to home for a 1.4 length fourth to Scotch.

Blinkers have really sharpened up Lincoln’s Kruz who also tackles 1000 metres in the third race.

And even though Latta says he faces a smart line-up, and will be run off his feet early, she fancies that will stop him from over-racing.

“He has freshened up nicely and looks fantastic.”

Lincoln Lane is disadvantaged by a wide draw in the fourth race but Latta still hopes he will be able to get into the finish late.

“From the tricky draw of 12 he will have to go back and get cover. He did get there a touch too soon at Otaki so the draw may help him on that score. It doesn’t look an overly strong field and he has trained on well.”

The Savabeel five-year-old showed more of what he is capable of when stepped up to 2100 metres at Otaki on December 18, beating all but Vineyard McPhee.