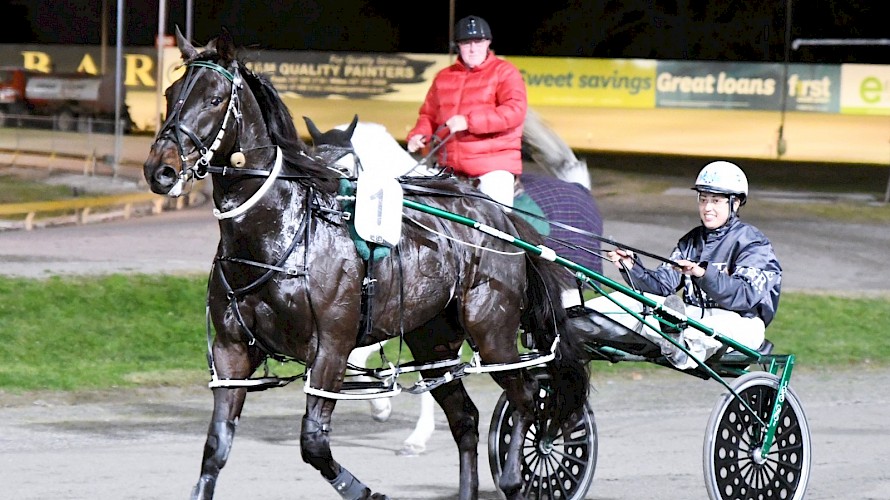 Monika Ranger brings Next To Me back to scale after his recent win at Cambridge. PHOTO: Chanelle Lawson.

Well bred three-year-old Next To Me is recovering at a Drury veterinary clinic after reacting badly to a viral medication.

“But in less than a minute he was in trouble and we had to send him to the vet hospital.

“He was in a bad way, and it was touch and go for him for a while, but he’s on the improve now and the vet thinks he could be well enough to come home on Friday.”

Green says it’s extremely rare for horses to react badly to the drug.

“It’s a medicine we always use for viruses - I’ve used a gallon of it. It’s the most commonly used remedy for viruses and secondary infections and is seen universally as safe.

“It was a bit of a worry but I spoke to Jenny Sonis, at Veterinary Associates, this morning and he’s turned the corner.

“He’s such a nice little horse and it’s a shame to see him compromised like that but I’m sure he’ll bounce back.”

Next To Me, a $200,000 yearling buy, won three starts back at Cambridge and turned in another cracking run there last week when coming from the rear for second to stablemate Frankie Major.

It’s the second recent scare Next To Me has given the Lincoln Farms camp - only last month there were fears he had damaged a tendon when a lump appeared on his leg, which turned out to be only a bang.

The Bettor’s Delight gelding is from the prolific winning family of Woodlands Stud’s the late Charlie Roberts, his dam Splendid Deal having produced, among others, Victoria Derby winner Maxim (12 wins) and NZ Oaks winner Splendour (8 wins).