The judge found one pixel in it - that’s one 2000th of a second that Savy Yong Blonk, top, has over Platinum Invador in today’s City Of Auckland Cup. PHOTO: Murray White/Auckland Tote Photofinish

Here it is. The official photo finish that saw the judge rule against Lincoln Farms’ runner Platinum Invador by the narrowest of margins possible in today’s $200,000 City Of Auckland Cup at Ellerslie.

One pixel, or one 2000th of a second, separated Platinum Invador, below, and Savy Yong Blonk at the finish of the 2400 metres.

With Platinum Invador’s rider Ryan Elliot crouched low and Danielle Johnson throwing everything at Savy Yong Blonk, the pair went over the line locked together, everyone left in suspense until the judge’s call eventually came through.

In the grandstand Platinum Invador’s owners were at odds on the result - John Street believed the horse’s momentum had got him home while Neville McAlister thought the horse was beaten. 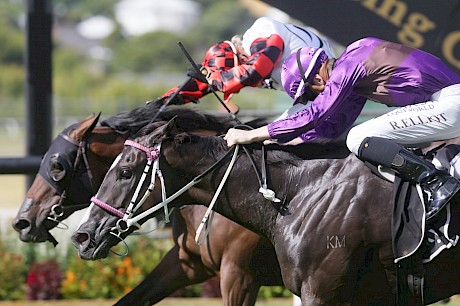 Platinum Invador’s blistering late charge left him a miniscule margin behind Savy Yong Blonk. PHOTO: Trish Dunell.“It was heads up, heads down,” McAlister said. “We had the momentum up but the post came at the wrong time - he was in front one stride before the post and in front again one stride after it.”

McAlister said Elliot was gutted when the photo went against him, believing he had won.

While disappointed at the result, McAlister was very proud of Platinum Invador’s effort.

“I’ve been beaten a nose before but not that close.

“But you learn to be bullet proof in this game. You have your turn. When your luck’s in, it’s in. And Te Akau’s is in at the moment.”

The difference this time was while Savy Yong Blonk was blessed being able to sit midfield, Platinum Invador was right out the back.

Elliot followed instructions and didn’t start his run until 650 metres from home, McAlister pointing out Platinum Invador couldn’t be ridden more aggressively because he got on the bridle too much.

“We just need a better draw. Then we can be midfield and get into it easier. He won’t have to do so much work to chase them down.”

“Being unbalanced there cost him a little bit and he took time to wind up. But he was flying over the last 150 metres - it was an awesome run. He really put in.”

McAlister said he would leave it up to trainer Lisa Latta to work out the horse’s programme leading in to the Auckland Cup, but he was likely to have one more run before the Avondale Cup on February 20, a race he was also nosed out of last year.

* Auckland Tote Photo finish operator Murray White said the margin of one pixel or one 2000th of a second was the smallest declared here.

“Pixels can represent bigger or smaller time gaps depending on the size of lens, the distance of the camera position from the track, etc.

“The maximum for our equipment is one 3000th of a second but one 2000th is probably the closest we get on our tracks. Any closer today and we would have had a dead-heat.”