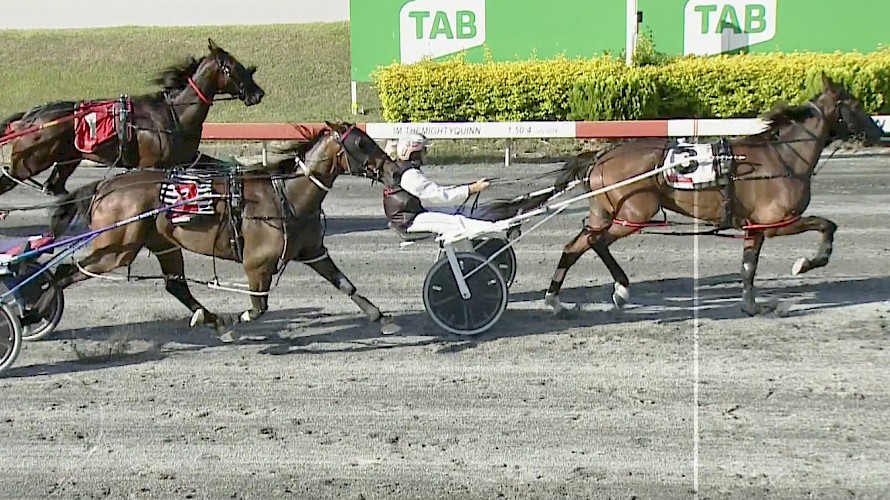 Double Or Nothing is closing nicely for third at the finish of his fast-run trial last Friday.

A sterling trial has driver Hayden Barnes feeling bullish about Double Or Nothing’s Queensland debut at Albion Park on Thursday.

“From a good draw I would have been confident of winning but it’s going to be tricky from the outside of the second row,” says Barnes.

“But he feels like a really nice horse and he’ll be fitter for his trial.”

Having his first serious test over 1660 metres last Friday since arriving in Queensland, Barnes didn’t hurry Double Or Nothing out of the gate from the pole, happy to settle three deep on the markers.

And when he asked him to run up the home straight Double Or Nothing responded well to minimal urging from Barnes to finish third, 5.3 metres from the winner Macey Jayde (10 wins), with My Secret Beach (9 wins) second.

On closing sectionals of 55.6 and 28, Double Or Nothing made ground strongly on the leading pair who are rated significantly higher - Macey Jayde an R78 horse and My Secret Beach an R72.

As an R59 pacer, Double Or Nothing is easily the highest rated in Thursday’s field, although Barnes points out fresh runner Amaya Becomes, who leaves from gate six, was a promising two-year-old last season. And another useful sort is Cheeseandkisses who made up more than 13 metres on the leaders in the last 800 metres last Friday.

“But if we get a good trip we’ll be right there.”

Double Or Nothing, Mr Consistency with two wins and 11 placings from 20 starts, has not raced since December 5 when he started favourite at Cambridge but weakened late to seventh after leading.

Sir Tiger, who runs two races later in 53 to 58 class, might have an indifferent form line but it hides several recent useful efforts, including his third last Friday.

Driving Sir Tiger quietly, Barnes had him at the rear, four back in the running line, and didn’t ask him to run until approaching the home turn when he came widest.

“I knew he’d hit the line well but I didn’t think he’d gone that well until I saw the splits,” says Barnes.

Sir Tiger’s finishing burst saw him close strongly on hot favourite Another Statement to be just 8.3 metres away.

Barnes says Sir Tiger seems to be responding to a new training regime were he makes sure the horse finishes his work charging to the line, feeling good in himself.

“And he is getting better which is a positive.”

Drawn five on Thursday, Barnes will be hoping to settle as handy as he can without using Sir Tiger at the start.

“It’s an even field but with some luck he can be right there at the finish.”

Double Or Nothing runs at 5.28pm NZ time at Albion Park on Thursday.

Ray: We’re all running for second against King Of Swing but watch the Dealer go in the Derby