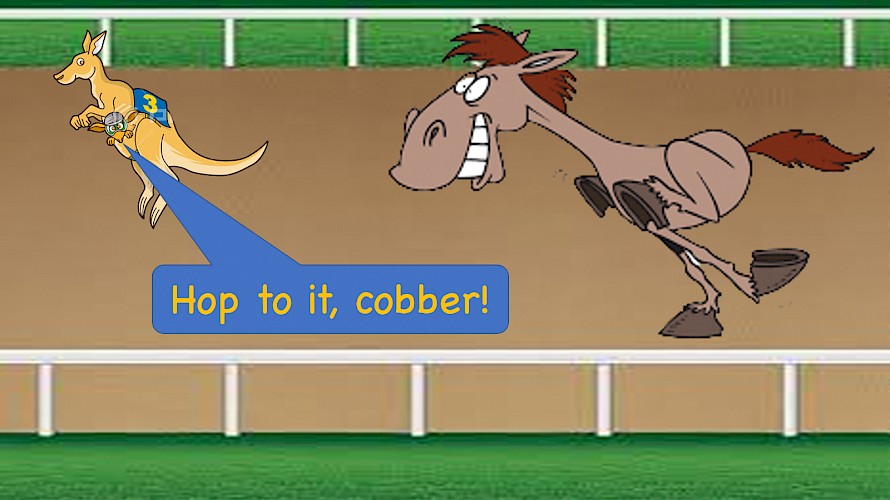 Copy That was almost as startled as trainer Ray Green when a roo raced him for 300 metres of his fast work yesterday.

Having his final strong hitout before Sunday’s Sokyola Sprint at Ballarat, Copy That didn’t know quite what to think of his surprise galloping pacemaker.

“When the kangaroo popped out in front of him, near the outside of the track, you could feel him thinking ‘what the hell is that’ and he pricked his ears and backed off a bit,” Green said.

“It was only a small kangaroo but man, could it go. We were bowling along a bit.

“It would have started out 10 metres in front of us but we were racing it down.”

It’s not the first time Green has seen a roo while working Copy That.

“When we were in Brisbane a really big one appeared but didn’t actually run onto the track. Apparently in Bendigo they have to chase 20 or 30 of them off the track before they work.”

Despite the interruption, Green said Copy That felt superb round the near 1000 metre training track at Romsey, which has a small hill in it.

While Green maintains Copy That just couldn’t cope with such a hard trip first-up at Cranbourne he says the theory that he might just need a few days to acclimatise also had some merit. The horse took a week to start thriving after his arrival in Brisbane in the early winter.

Green says it’s hard for driver Chris Svanosio to make a plan for Sunday given he has drawn three on the second row over the 1710 metres.

“He’ll just have to follow them out and see where he ends up then try to get home over the top of them.

“But I’ll be surprised if he doesn’t go a really good race the way he feels now.”

Green says Copy That will have no trouble round the left-handed Ballarat track which is 1000 metres with a 248 metre home straight.

Copy That races at 6.28pm NZ time at Ballarat on Sunday.