The connections of classy stayer Platinum Invador have no expectations on the horse when he makes his debut for former champion trainer Peter Moody on Saturday.

Now based at Pakenham, the City Of Auckland Cup winner resumes over 1600 metres, a distance far short of his best, and carries equal topweight of 62kg in the fourth race.

It won’t be until Platinum Invador steps up over ground that co-owner Neville McAlister says Moody will know what course to chart with the horse this spring.

“He’s only had one jumpout so will be well underdone and if he can just run past a couple of stragglers, we’ll be happy.”

Despite Moonee Valley being a turning track, with a short straight, Moody chose to run Platinum Invador there because often races are run a truer pace.

“At Flemington, which was his option next week, they can put the brakes on and sprint home, so the horses at the back get left behind.”

McAlister says only when Platinum Invador hits middle distances will Moody know if he’s up to the top company in Australia.

While nominated for the Caulfield and Melbourne Cups, McAlister says it may well be that Moody elects to chase the rich country cups instead.

“He’s not over there to specifically run in the biggest races. We’re there to win good stake money.” 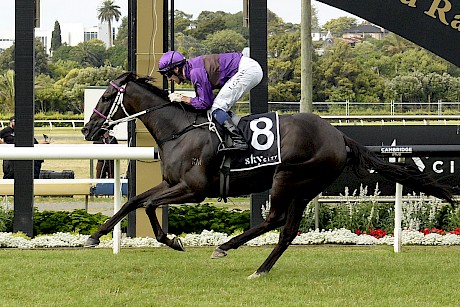 Platinum Invador shows his staying prowess winning the City Of Auckland Cup.McAlister, who races the five-year-old with Lincoln Farms’ owners John and Lynne Street, says he chose Moody to train the horse in Australia because he has a smaller team.

“A lot of the other trainers over there have a couple of hundred in work and he has only 32 and is very hands on.

“He was full on last time he trained but is doing it more as a hobby now.”

A four-time Melbourne premiership winner, Moody hit the world headlines with Black Caviar who was unbeaten in 25 starts and retired in 2013 with earnings of nearly A$8 million.

Moody had won 2402 races and $113 million in prize money when in March, 2016 he was suspended for six months over a high cobalt level and closed his Caulfield stable.

Moody’s long time stable jockey Luke Nolen is back riding for Moody and was pleased with how Platinum Invador galloped in his latest work.

“It’s great being able to get feedback from someone as experienced as Nolen,” says McAlister.

“The horse has been working on wet tracks so far, so it’s hard for them to assess him, but they’ll know soon enough.”

Platinum Invador, third in the Auckland Cup at his last start on March 7, is well down the priority list for the Melbourne Cup and will need to be winning some of the lead-up races to force his case, says McAlister.

Despite the coronavirus pandemic, which threatens international travel, 174 horses were nominated for the Melbourne Cup, up from 152 in 2019.

The list includes 30 internationals, 16 for Aiden and Joseph O’Brien.

Weights for the cup will be released on Tuesday.