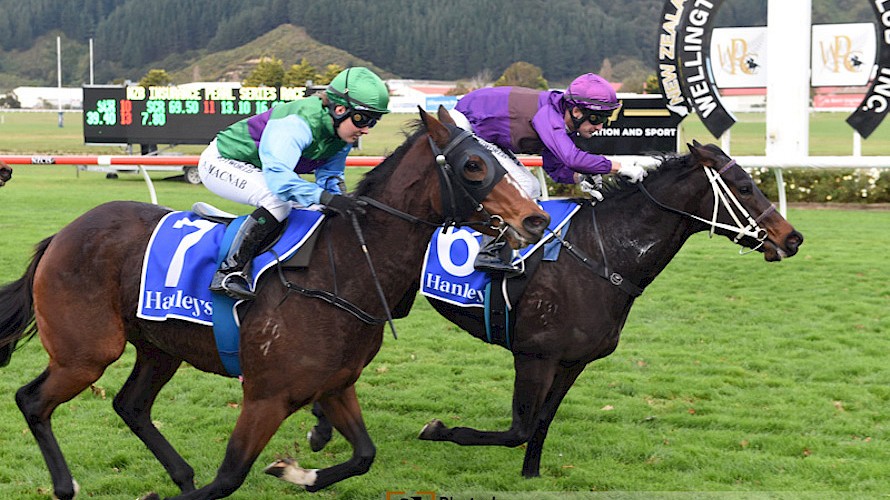 Platinum Rapper is capable in loose footing but don’t expect too much of her on Saturday. PHOTO: Peter Rubery/Race Images.

Trainer Lisa Latta is not expecting Platinum Rapper to be at her best when she lines up at Awapuni on Saturday.

The mare has missed work through a lingering stone bruise and, from a tricky wide draw, will be ridden back in the field in the 10th race.

Platinum Rapper had been on target for a trip to Riccarton for the Winter Cup but was eased in work after her second run this campaign when a stone bruise erupted.

“I thought we had it under control when she ran last time (on July 31) but she went a disappointing race and afterwards it flared up again,” says Latta.

“I’d say it’s been worrying her for a while and she’s definitely missed work.

“But I’m confident I’m on top of it now and she galloped nicely on the grass this morning.”

Latta considered taking Platinum Rapper to the jumpouts next Wednesday but with the races on her back doorstep this weekend, decided to let her run.

“The 12 draw is tricky so we may have to go back and just look to see her getting home well.

“Depending on how much of an impact the jumps racing earlier in the card has on the track this may well end up playing to her advantage.”

Latta is hoping the forecast of persistent rain until Saturday is correct as Platinum Rapper is better in looser rather than sticky footing.

“As long as I see her hitting the line well on Saturday, I’ll be happy. I will step her up over more ground after this run.”

Latta finds it hard to make any kind of case for Lincoln Farms’ other runner Lincoln Dreamer (race eight) who has been very disappointing in three runs back from a spell.

“I’ve freshened him up and I’ve been swimming him, which he really enjoys, but it is getting to the stage where he needs to show something.”