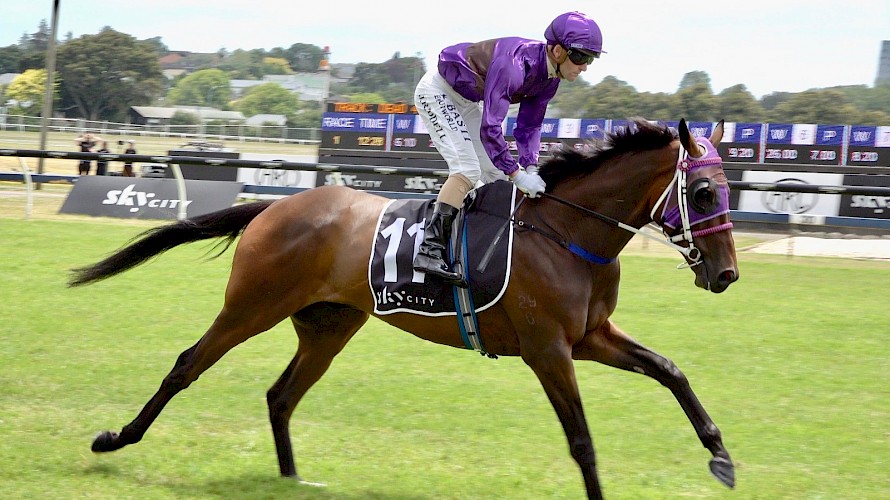 Platinum Road kept his New Zealand Derby hopes alive with a powerful late finish for fourth at Trentham on Saturday.

Trainer Lisa Latta was rapt with the way the three-year-old fronted up to his older rivals, unleashing the fastest last 600 metres in the race of 33.96 after rearing at the start and losing valuable ground.

His sectional compared extra well with the 33.89 recorded by Group I Thorndon Mile winner The Mitigator, competing at a distance 600 metres shorter.

“He got further back than we’d anticipated and to run fourth from where he came from I thought was a really good run by a three-year-old,” Latta said.

Platinum Road still had only two or three behind him passing the 400 metre mark but once angled into the clear by Leith Innes put in some telling late strides to finish only 5.2 lengths behind tearaway winner He No Opilio.

“He just keeps improving and I’d love to see him make the derby field.”

The $1million New Zealand Derby (2400m) is run at Ellerslie on February 29 and Platinum Road presently sits 17th in the qualifying order for the 18-horse field.

Kamanda Lincoln, arrowed, angles into the clear late to chase after Wellington Cup winner Soleseifei.Kamanda Lincoln will be set for the $50,000 St Leger (2600m) at Trentham on March 14 after his tough effort for sixth in yesterday’s Wellington Cup.

One of the outsiders of the race, starting at $73, Kamanda Lincoln was held up for a considerable distance in the run home, behind a wall of horses, but was doing his best work late when Darryl Bradley finally was able to work into the clear.

Kamanda Lincoln was only five lengths from winner Soleseifei at the line and only half a length and a short head from fourth-placed Cead Mile Failte.

“I think he would have run fourth if he’d got clear sooner and if he’d got through you don’t know what he could have done.

“He can stay and, while I don’t feel he has enough speed to be an Auckland Cup horse, a race like the New Zealand Cup really suits him. He didn’t come back into work in time for the race this campaign, because of an ownership change, but well put him aside after the St Leger and set him for it this year.” 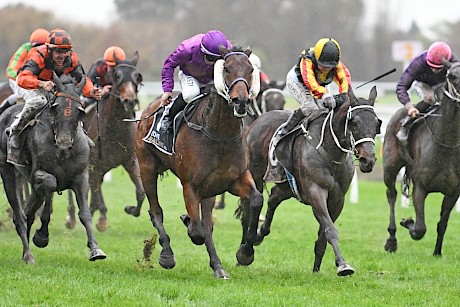 The news isn’t so positive on Johnny Lincoln who gave ground 1200 meres out in the cup and was pulled up by rider Robbie Hannam.

The seven-year-old sustained a significant injury to his off fore tendon and will now be retired.

Latta says “the good looking boy” was a bit of a stable favourite and she will work to patch him up and rehome him.

Johnny earned a reputation as a bit of a bridesmaid, with 18 placings, including 12 seconds, alongside his two wins, but his kind nature and try-hard attitude won everyone over, Hannam in particular.

Lincoln Raider will be going for a spell after Latta’s suspicions he was not right were confirmed yesterday, rider Opie Bosson easing down on the horse well before the line in the third race.

Latta had kept the horse almost exclusively to the swimming pool since his last start when rider Jonathan Riddell reported he didn’t feel 100% despite running an unlucky third at Awapuni on January 4.

“He’s been in work a fair while and I’m pretty sure he’s feeling the firm tracks in his knees,” Latta said.

Latta says her vet Tim Pearce has been over the horse numerous times, and she’s monitored him regularly since his operation to remove bone chips last year.

Lincoln Star will also go out for a month after failing to fire in the last race.

“He was flat all the way and I think he just needs some rain.”