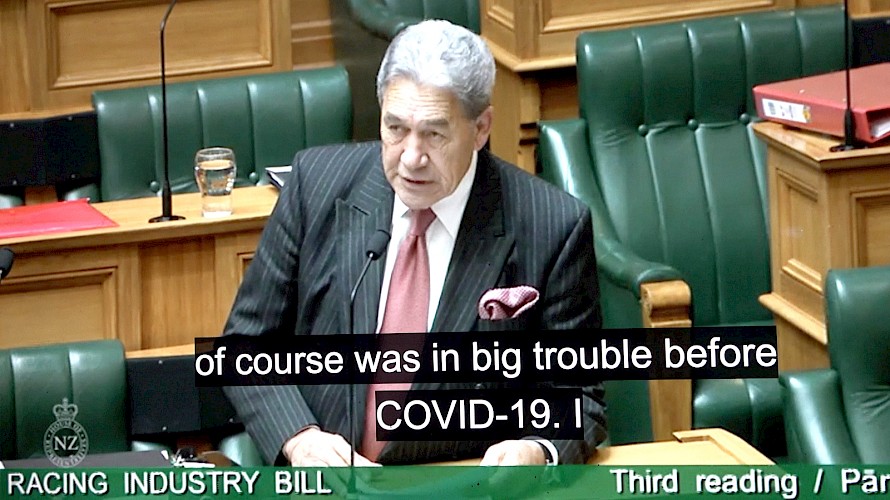 Racing Minister Winston Peters speaking during the third reading of the bill in Parliament today.

The Racing Industry Bill was passed in Parliament this morning with MPs indicating a need for urgency in appointing a new board to govern the beleaguered industry.

TAB NZ will be established as the commercial betting operator, while administrative functions will be devolved to the three racing codes.

In debate during the third reading, with Parliament sitting under urgency, both Rangitikei MP Ian McKelvie and Hunua MP Andrew Bayly asked Racing Minister Winston Peters how long it would take to appoint a new board.

McKelvie: “There is an urgency to get people who understand the gaming industry on the board.”

The current board of RITA is scheduled to stay as the interim board of TAB NZ until the new Bill gets Royal Assent. In a statement earlier this month Peters said the directors’ terms would end on the enactment of the Bill or on June 30, 2021 - whichever came first.

Peters said it was over to the industry to work out the time frame - one of the features of the new Bill was that it limited the need for future government intervention while creating the legislative framework for revitalising the industry.

Bayly also sought assurances from Peters that the selection panel which appointed the board would have the right professional expertise, to which Peters replied he was sure it would be capable of eliminating the chaff and seeking excellence.

“For too long our domestic racing industry has been left to fade into obscurity at the expense of jobs and the passionate people and communities that support it,” Peters said.

“The coalition government has now delivered on its promise to create a framework that enables the industry to take the reins and move itself forward. With this Bill, responsibility for the future growth of the industry sits with the people who know it best.”

An updated integrity system will be implemented by the new Racing Integrity Board (RIB) with appropriate independence from the industry. This will include responsibility for ensuring industry compliance with high standards of animal welfare.

Peters said the refurbishment and modernisation of racing venues was required and the Bill supports this by helping the industry to release capital from venues no longer required for racing while ensuring appropriate considerations are made to other community interests in the property.

The Bill underwent several changes during the Select Committee process in which the voices of clubs, jockeys, breeders, owners, trainers, pundits and many others were heard.

“Listening carefully to the wide range of submissions from the industry made the Bill less prescriptive, and gave greater autonomy to the codes to enter agreements and resolve disputes without ministerial intervention. The changes were welcomed, and are consistent with the overall intent of the reforms, namely to give the industry the tools to better manage itself.”

A new body Racing New Zealand will be established to enable collaboration between the codes and other industry entities for the betterment of the industry.

Peters thanked the Select Committee, the 900 plus submissions which contributed to strengthening the Bill and RITA for their tireless work.

“The gratitude of the whole industry must also be given to John Messara whose report set us on the path that has led us to this moment.”