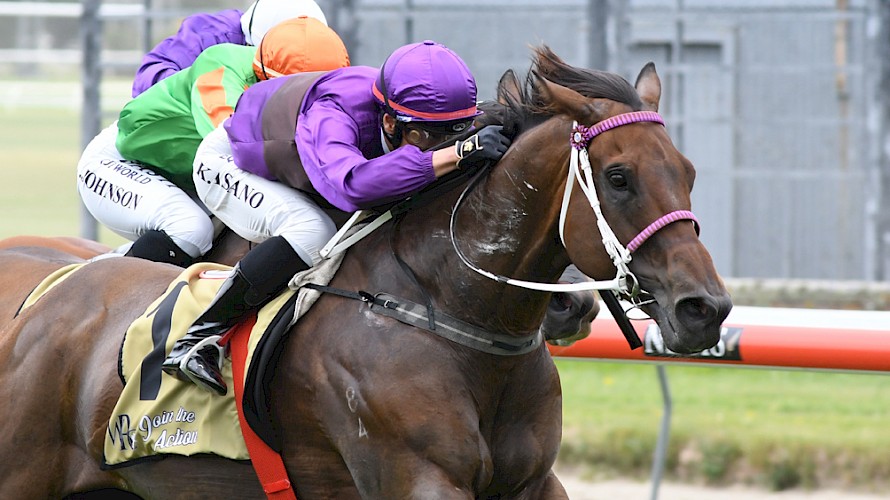 Kozzi Asano sits low over Lincoln Raider as he powers to the front at Trentham today. PHOTO: Peter Rubery/Race Images.

Trainer Lisa Latta isn’t about to put too much strain on Lincoln Raider now that he’s right back to his best.

The powerful five-year-old gave his rivals a galloping lesson at Trentham today, making the most of a big drop in class to rating 72 company to come from the tail of the field with an irresistible run to win, going away, by a length and a quarter.

But while rider Kozzi Asano reported Lincoln Raider was very impressive, responding to hands and heels riding, Latta says she’s not about to start traipsing all over the country tilting at too many bigger races.

“He’s already been to Christchurch and I’m reluctant to take him up to Auckland for the Dunstan 1500 Final on Boxing Day.

“He’s had that chip out of his knee and I don’t want to be tripping away and running on hard tracks when there’s no need to. 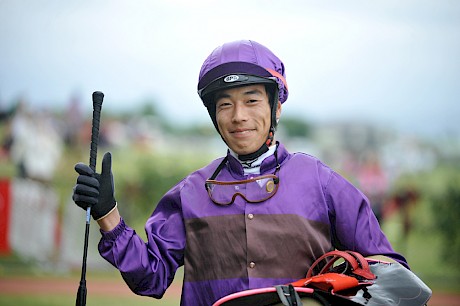 Kozzi Asano gives the thumbs up. PHOTO: Peter Rubery/Race Images.“There are plenty of good races coming up round here. If he comes through today well there’s a nice $30,000 82 mile on Manawatu Cup day (December 21) which is on our back doorstep.

“There’s often rain round Christmas and that’s what he needs.”

Lincoln Raider, while very talented, is not ready for the big time like today’s Captain Cook Stakes, says Latta.

“He’s not a weight-for-age horse and he’s not even an open horse yet but if we’re to have a go at a decent race the Thorndon Mile is the one.”

Run at Trentham on January 18 for a stake of $200,000, it would be the perfect stage for his entry into the big time, says Latta.

“He goes so well at Wellington where the long straight really suits him.

“Kozzi let him do his own thing today and that’s the way to ride him. He’s best when he’s not being hunted up.”

He was still third last passing the 400 metre mark today but when Asano produced him down the outer he quickly drew in stablemate Lincoln Hills, who had burst to the front, and had the race in safe keeping in a few big bounds.