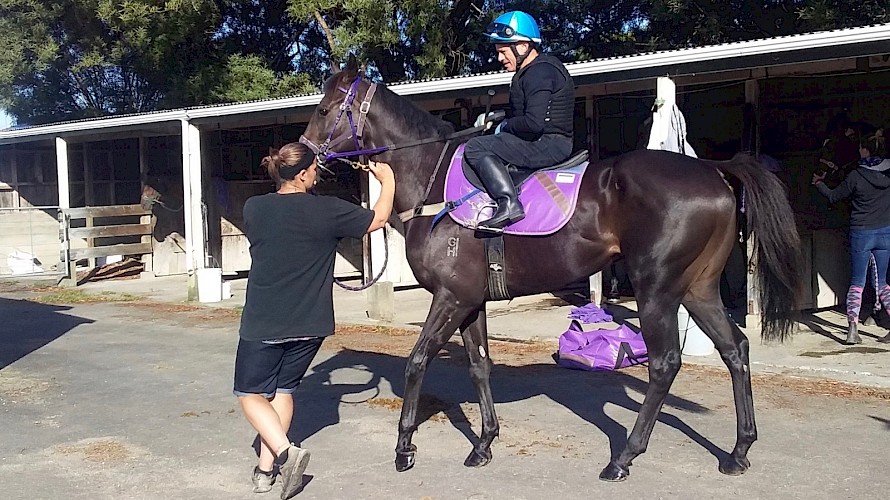 Platinum Rain is being aimed at the big three-year-old races by trainer Lisa Latta.

Heavy track or not, promising galloper Platinum Rain will start at Otaki on Thursday as trainer Lisa Latta plots a path to the big three-year-old races.

But the likely heavy 11 conditions look set to keep Lincoln Farms’ two other runners at home in their boxes, neither Lincoln’s Kruz nor Lincoln Town at their best in a bog.

Latta today nominated Platinum Rain for the $500,000 New Zealand 2000 Guineas at Riccarton on November 7, a date which she says is creeping ever closer.

“To be ready for that race he will need to take his place on Thursday. Ideally, I would have like to have given him one more jumpout or trial but it looks a good race to start him off in. With no exposed form, it’s not an overly strong field.”

Latta liked the long striding Platinum Rain even before he ran two excellent jumpouts 12 months ago.

And, while he failed to beat one horse home on debut, at Trentham in January, Latta says that run can be completely forgotten.

Platinum Rain was so green and colty, he earned the chop straight away and, despite still being labelled a colt in the raceform, he is definitely a gelding - and a much more tractable one at that, says Latta.

A $160,000 yearling buy for Neville McAlister and Lincoln Farms, Platinum Rain has impressed all his riders, Shaun Fannin particularly taken by the ease with which he does everything.

Thursday’s race rider Jonathan Riddell got a good feel for the horse in trackwork last Saturday, also impressed by the way he galloped.

Latta was thrilled with the way the horse trialled at Otaki on August 11, running on well and finishing under a good hold in third place.

The track was a heavy 10 that day and Latta says Platinum Rain handled it well.

Conditions on Thursday are likely to be similar with 8.4 mls having fallen at Otaki since its heavy 10 rating this morning. 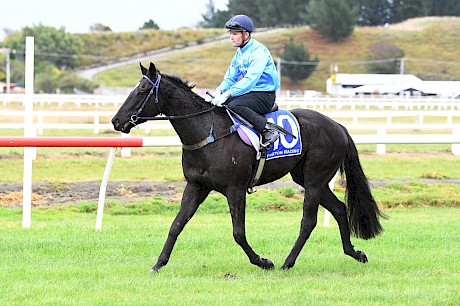 Lincoln’s Kruz … talented galloper looking for reasonable footing. PHOTO: Race Images.Latta was hoping for better ground for Lincoln’s Kruz in the fourth race, especially as on paper he looks the best chance.

Only three of his 10 rivals have raced before and none have shown anywhere near the same ability.

Lincoln’s Kruz ran a fine first-up third on July 4, after being four wide on the speed, but never got into the race at his last start when ridden by inexperienced apprentice Temyia Taiaroa and bumped on jumping.

Riddell is down to ride the horse on Thursday and Latta says she is really happy with where he’s at.

“He has had a couple of really good gallops in the last week.”

Even though Thursday’s race would set him up well for a special conditions maiden on the first day of the Hawkes Bay Spring Carnival on September 19, a decision on whether to start will only be made after the track conditions are known.

“If the track gets really wet I may scratch him and go to the Foxton trials on Tuesday.”

“He is looking great, his coat is starting to turn and he is feeling well but we won’t start him if it does turn to a really heavy track.”

Latta says the wide draws Lincoln Town has copped in his last two starts have been the undoing of him.

“He has got back further than he likes and he is a horse who needs a strong rider to put him in the race. Even in trackwork he does only what you ask of him and I don’t believe an apprentice would be able to get him going. I’ve got Jonathan on him too.”