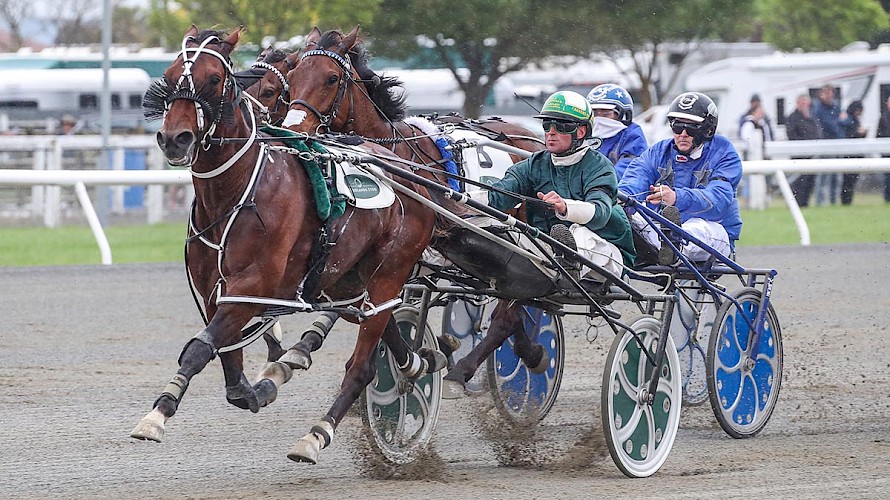 Copy That is too fast for Self Assured and Spankem in the Ashburton Flying Stakes. PHOTO: Ajay Berry/Race Images.

Ray: Flying Mile right up Copy That’s alley and, if he leads, it should be game over

Copy That is primed to really fly in Friday night’s Flying Mile at Cambridge judging by his sectional figures in the Auckland Cup.

But Lincoln Farms’ trainer Ray Green won’t be drawn on what time the little four-year-old will run when he faces two of the best horses in the country, Self Assured and Spankem, on one of the fastest circuits.

Incredibly, Copy That paced his last mile of the 3200 metre Auckland Cup, sitting parked, in 1:53.5, and was still coming at the finish, testimony to how well Green has the horse going.

Copy That looks more likely to go closer to the 1:51.6 Adore Me ran in 2015 but Green isn’t rating that as a priority, nor testing Border Control’s New Zealand record of 1:50.6.

“You get no points for breaking records,” Green said. “If Maurice (McKendry) can get in a slow quarter, I’m sure he will.”

Green said Copy That’s “huge” Auckland Cup placing dispelled any theories that the horse couldn’t get two miles but “the mile is right up his alley.

“He’ll fly a mile and if he made the lead without too much trouble I think he’d have them covered.

“If you take a line through the Ashburton race I can’t imagine the result being any different.”

In the Ashburton Flying Sakes, run at 2400 metres, Copy That led and easily held Self Assured and Spankem, reeling off closing sectionals of 53.4 and 25.2.

That race, on October 26, was the last race Copy That won but Green said the horse had had plenty of bad luck in five starts since.

He showed just how potent he was at the shorter trip when he clocked a mile rate of 1:52 in winning over 1700 metres at Auckland last August.

Copy That, from three, needs to cross Mach Shard and Triple Eight to lead on Friday night, which he is certainly capable of.

“It’s pointless going back but crossing them could be easier said than done. If Mach Shard wants to lead, it will make things tougher.”

But Copy That definitely has the barrier edge on the two now Hayden Cullen-trained pair Self Assured and Spankem, who are in six and seven, which is reflected in the bookies’ odds.

The opening market has Copy That a $2.30 favourite, ahead of Spankem ($3.20) and Self Assured ($3.40) who has not started since winning the New Zealand Cup two months ago.

Green said he’d just kept Copy That ticking over since the Auckland Cup and he trained nicely on Tuesday, without being asked for too much.

“He was pretty fit before the cup and seems very well.” 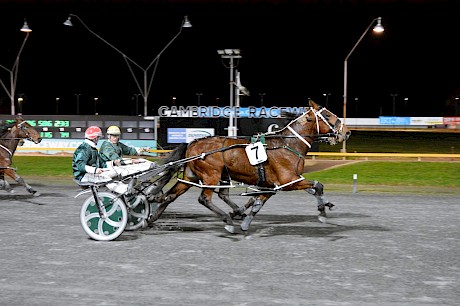 Captain Nemo shades stablemate Apieceoflou in his win at Cambridge. PHOTO: Chanelle Lawson.Captain Nemo, in race two, is easily the best chance of the remaining three Lincoln Farms’ runners on the night.

He drops way down in grade to a rating 40 to 48 race, whereas he faced the best three-year-olds in the country last time in the Harness Million at Alexandra Park.

Captain Nemo leaves from the outside of the arm but Green says he can overcome that.

“He just needs to do everything right. He’s still a work in progress and hits a knee going right-handed. Left handed, at Cambridge, he seems a lot better. He’s a definite winning chance.”

In his only two starts on the course, Captain Nemo has won and run fourth, pacing a mile rate of 1:55.6 when fourth to B D Joe and American Dealer in a Sires’ Stakes heat last October.

He was having his first race for more than two months in the Harness Million on New Year’s Eve so will be vastly fitter this time.

“They’ll win one soon but I can’t guarantee it will be Friday as they’re both inconvenienced by bad draws. “Serina will go a good, honest race but she’ll have to rough it to get handy from seven. She’d be better with a draw and a trip.

“Brian Christopher needs to draw the front and go forward but that won’t happen from the inside of the second row on Friday night.

“He’ll need some luck. If they roll along, it will suit him.”