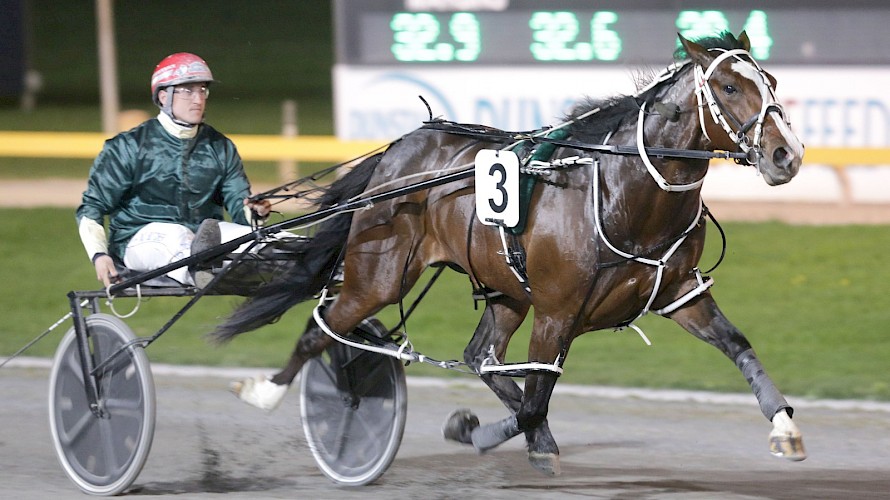 Ray racks up another treble for Lincoln Farms as Louie, Larry and Lindi all go wire to wire

Trainer Ray Green is starting to make a habit of notching race night trebles, his perfect three at Cambridge tonight the third time he’s done it recently for Lincoln Farms.

Green started off last season with three at Cambridge and notched three at Auckland near the end of the term, while tonight Double Or Nothing, Lindi Lincoln and Larry Lincoln made it look very easy all scoring end-to-end wins, with Zachary Butcher in the cart each time. 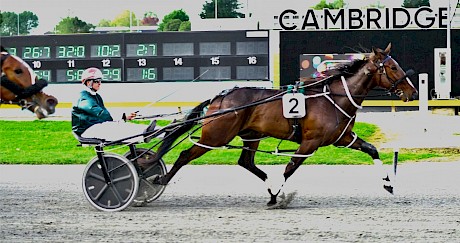 Gladamare is closing fast but Double Or Nothing is still pacing strongly. PHOTO: Phil Williams/FokusPhotography.Double Or Nothing, or Louie to his friends, earned a shot at the better three-year-olds in next week’s Sires’ Stakes heat at Auckland with his commanding win in the second race.

Sent straight to the front by Butcher, Double Or Nothing never looked in danger, finding plenty late to score by a length in the good time of 2:42.2 for the 2200 metres.

Dubbed a bridesmaid last season after a succession of placings, Double Or Nothing notched back-to-back wins tonight, Green saying he “looked to be enjoying himself with ears pricked.”

“People might have thought he was a cheat but he’s just needed time and there’s no doubt he’s a lot stronger this time in.

“I’m really pleased with him - it looks like he’s turned the corner. We’ll put him in the Sires’ Stakes heat next week and see what happens.”

Larry Lincoln might not be up to Sires’ Stakes level but Green says you can’t knock what he did tonight in his first race start.

Another by Sweet Lou, Larry Lincoln also found the early lead and paced faultlessly all the way to win by three and a half lengths.

“He could have won by a lot more but he only went 2:45.8 so it probably looked a lot better than it actually was.

“Yes he was good, but to be honest I don’t think the rest were much chop and the next step up will be considerably harder for him.

“But he’s come along really well this prep and he’s a neat little horse who should win a few more races.

“I should actually have taken him to Auckland to debut - he would have won there too based on what he showed tonight.” 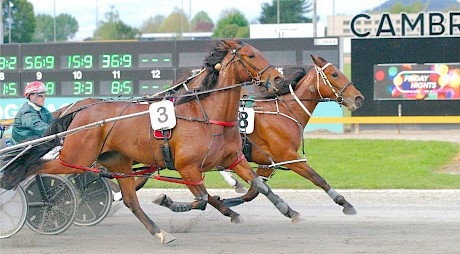 Lindi Lincoln, inner, just holds off the fast-finishing Dancing Chick. PHOTO: Phil Williams/FokusPhotography.Green was really pleased with the effort of Lindi Lincoln who showed a torrent of speed from the outside of the gate to quickly reach the lead.

Butcher reported afterwards he thought the Sir Lincoln filly was going to simply “clear out turning for home when the horse was simply gliding along.”

“But she shut up shop halfway down the straight and really got tired the last bit only getting home by a head.

“Her fitness certainly wasn’t where it should have been because she missed that race last week when pulled up at the start after locking wheels.

“She would have been short tonight, especially after burning out of the gate, so that makes the run even better than it looked.”

Green reckons he’s going to set the bar higher now and attempt a treble when the Purdon/Rasmussen juggernaut is in town. 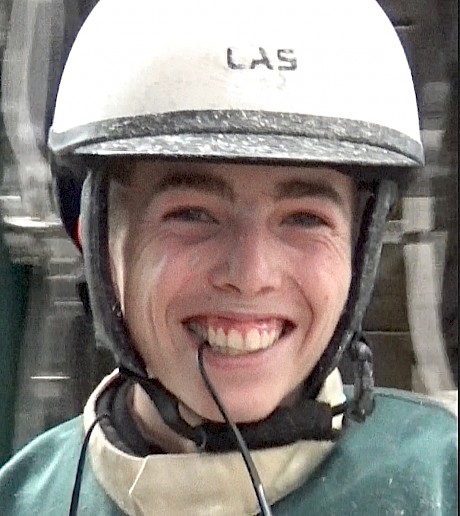 Green was delighted that after Double Or Nothing denied rookie driver Zev Meredith a win in his first race night drive - he was buried deep on the markers and flashed home late for second on Gladamare - the lad came out later in the night to score his first win on Havehorsewilltravel.

Green was taken by the youngster last Saturday when he drove Double Or Nothing to an all-the-way win at the workouts.

“He’s a good kid and could have a future.”

Meredith is the latest graduate of the Franklin Kidz Kartz programme and only last year was driving the ponies at Cambridge where he took the Champions Cup.