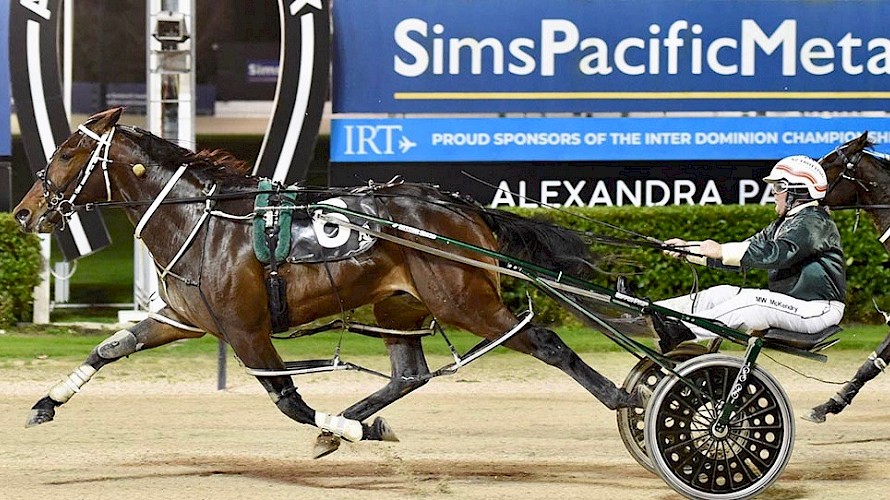 Ray: Simply Sam’s very fast but he lacks the tools for a Queensland Derby campaign

Simply Sam once again showed his great turn of foot at Alexandra Park tonight but he will need to develop his all round game further before trainer Ray Green tests him further afield.

Thoughts of a winter campaign in Queensland have been shelved despite Simply Sam notching the third win of his career with consummate ease.

While the American Ideal three-year-old showed blistering speed to reel in the leaders in the last 150 metres, and win by two lengths going away, it’s the first part of his races that he needs to work on.

As usual, Simply Sam showed no gate speed, and was running last for driver Maurice McKendry after just 200 metres, a profile which Green says has in part KOed a tilt at next month’s Queensland Derby, a race the stable’s American Dealer won last year.

“He needs to develop gate speed to warrant taking anywhere. Brisbane is a long way to go to end up in the back half of the field.

“You need to be able to take up a position at Albion Park, where they run very fast closing sectionals, and until he improves his gate speed, he’s not going anywhere.”

Green says the fact there are a couple of very good three-year-olds in Queensland was also a factor in passing on the trip.

“He’s had only a handful of starts and hasn’t fronted up to the top three-year-olds yet.

“Last year Krug was the big talk for the derbies over there but little Dealer had beaten him several times before so I wasn’t worried about him.

“We’ll just pick away here and see where he takes us. We’ll try to develop him to the top level and target races round Christmas like the New Zealand Derby at Addington, a track that should really suit him.”

Green believes given another six months Simply Sam will be right up to competing with the best three-year-olds.

“He’s a lovely pacer and has very high speed.”