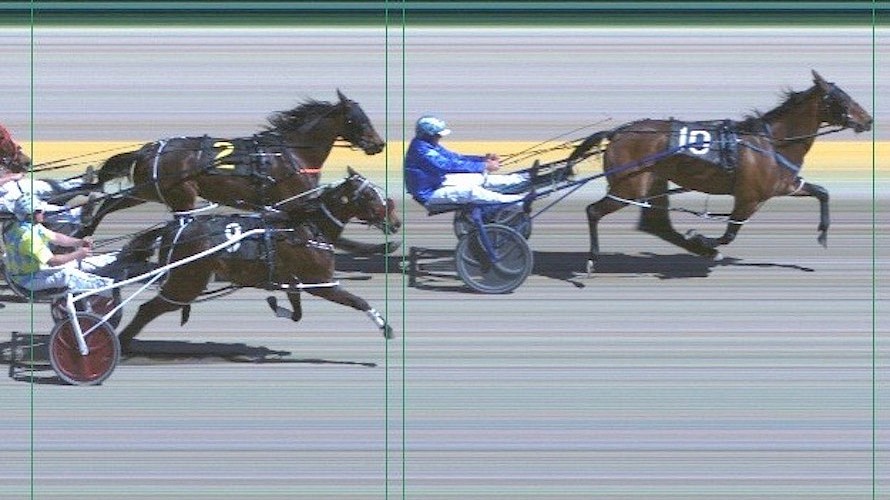 Make Way rushes home down the outer to run second in today’s trial at Menangle.

Three months of frustrations finally look to be over for the connections of talented pacer Make Way.

When the four-year-old stepped out at today’s Menangle trials, it was his first run since June but you wouldn’t have known it the way he dashed up the home straight to run second to speedy pacer One Hell Of A Ride.

Driver Anthony Butt (wearing the Rosati colours of yellow and light blue diamonds) crossed from nine on the gate to be fourth on the markers and said the horse travelled well throughout.

“And when I pulled out in the straight he zipped up well.”

“These trials are often like a week’s work because they go so fast but that was just perfect for him today.

“He seems to be over all his hiccups now and the plan is to take him to Melbourne with a team next week. 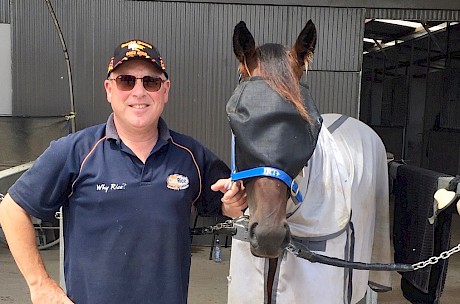 Anthony Butt with Make Way at Menangle.“There are no trials here next week so we’ll either give him a private trial or trial him when we get to Melbourne.

“There are some good races for him there in his grade, whereas here he’d be thrown into the free-for-alls.”

Butt said he and trainer Sonya Smith felt sorry for Lincoln Farms and its partners in Make Way over the setbacks the horse has endured in the last three months.

After weakening out in a 1:50.9 mile on June 13, it was discovered the horse had a foot abscess which lingered for weeks.

“It just wouldn’t burst and in the end we had to lance it at the back of the bulb. The same thing happened to (My) Field Marshal a couple of years ago.

“We even X-rayed it because we thought there must be a foreign object in there but there wasn’t.”

When the foot finally came right and Make Way was ready to go again, he caught a bad cold.

“A virus went through the whole of Menangle. Our team all got it and there’s not much you can do, you just have to wait it out.

“Luckily it happened in the middle of winter so he didn’t miss any big races but I was still pulling my hair out.”