Robbie: Give Princess Amelie better ground to bounce off and watch her go

Give Princess Amelie a dead track and she can win a black type race, says today’s winning jockey Robbie Hannam.

You only have to watch the last 100 metres of today’s fifth race at Waverley to see what Princess Amelie will be able to do on better footing, says Hannam.

It was only Princess Amelie’s class that got her through today in heavy 10 footing.

“That last bit when she really kicked was the only time she was comfortable in the ground.”

Hannam followed trainer Lisa Latta’s instructions to the letter, coming wider in the straight to avoid the inside running where nothing had won all day. 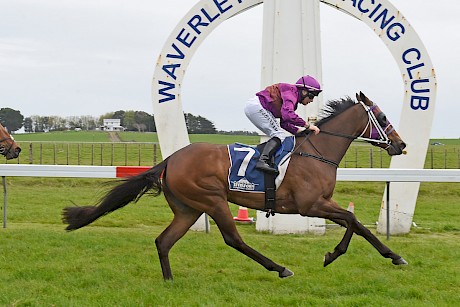 Princess Amelie strides clear at Waverley. PHOTO: Peter Rubery/Race Images.And he found the right strip late, putting paid to Malo Bik in a few big bounds and running away to a length and three-quarter win.

“She was handling it just enough to win but she was the class horse of the field it was really only her ability that got her home.

“And she’s not fully fit yet. She’s had a nice build-up with two jumpouts but still has plenty of improvement in her.

“She’d love a dead 4 or dead 5 track to bounce off and if she got that I think she’s good enough to win a Listed or low key stakes race.”

Hannam describes Princess Amelie as a lovely mare with a lot to like about her.

“She’s consistent and she can jump and race on the speed and that’s half the battle won right there.

“A horse like Platinum Invador gets back and does it the hard way but it’s easier when you can be on the speed.”

Latta now has designs on one of two Group III races on the middle day of the cup meeting at Riccarton in November, either the $100,000 Stewards Handicap or $80,000 Breeders’ Stakes for fillies and mares.

A win in either would clinch her value as a broodmare for Lincoln Farms’ owners John and Lynne Street who paid $300,000 for the daughter of Snitzel at New Zealand Bloodstock’s 2017 premier yearling sale at Karaka.