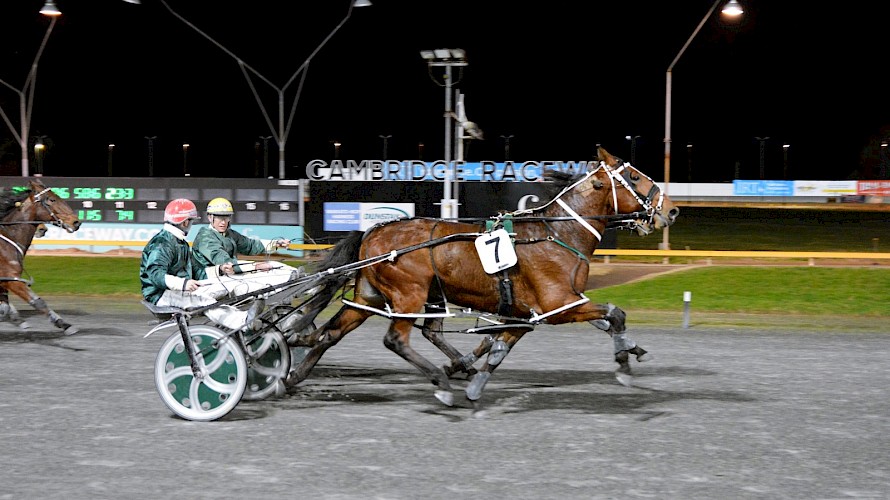 Zachary Butcher looks across at his father David after Captain Nemo pips Apieceoflou on his inner. PHOTO: Chanelle Lawson.

But that hasn’t blunted Paddison’s excitement at winning a race with the first horse he has raced and only six weeks after being gifted a share.

Paddison was given an all expenses paid 10% share in the promising two-year-old by Lincoln Farms’ owner John Street as part of his prize for finishing second in the Wairakei Invitational, the runaway winner Ryan Fox getting a 20% share in France Nandor.

And Paddison earned bragging rights over his golfing rival when Captain Nemo swooped like an eagle in the run home to nab his stablemate and warm favourite Apieceoflou right on the post.

Paddison, a Wellington based pro golfer, just happened to be in Cambridge where he has been labouring for his cousin, but he missed getting the email about his horse racing.

But while he missed out on the excitement on course, on a wet and cold night, he delighted in the news relayed minutes later by Lincoln Farms’ business manager Ian Middleton. 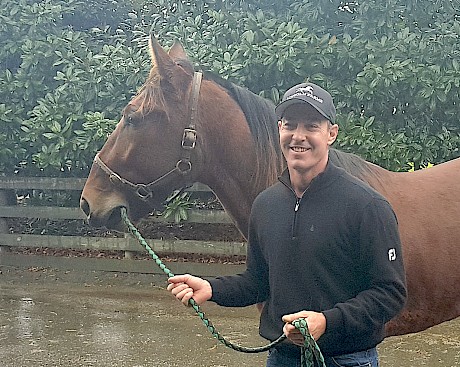 Gareth Paddison with his first horse Captain Nemo.“I’ve watched the replay several times and I can’t believe how well he finished, and from so far behind. It was awesome.

“It’s very exciting, even more so now that he’s won so early in the piece as a two-year-old. He obviously has good potential.”

Paddison had been on course the last two times Captain Nemo raced at Auckland, even venturing to the stables to give him a pat.

“Obviously that didn’t work as he didn’t come in.”

Paddison says he’s never had a horse, doesn’t have a TAB account and wouldn’t even know how to put a bet on.

But he’s learning fast about racing and is looking forward to the next time the horse races, hopefully at Auckland where he enjoys the hospitality offered by John and Lynne Street.

Paddison says being able to follow the horse is some consolation for being grounded with most of the other Kiwi pro golfers because of the coronavirus pandemic.

He’ll play in the Muriwai Open next week and the pro-ams which are due to start here in September and October but can’t see any overseas trips in the near future.

“The Australian tour is meant to start in the first week of September but I don’t know what the quarantine procedures will be like, especially for the Victorians.”

Lincoln Farms’ trainer Ray Green has always liked Captain Nemo, buying the son of Captaintreacherous as a yearling for $110,000 in Christchurch last year because he was so athletic looking and had a beautiful body.

But he has grown so much in recent months and been so lazy he was beginning to think it would be next season as a three-year-old before we saw his true ability.

His instructions to driver Zachary Butcher last night to drive the colt conservatively obviously paid off, however, as he powered home from second last on the home turn to claim a half head win.

Apieceoflou was gallant in defeat despite being used early then having to be restrained, from three wide outside the leaders, to seventh in the running.

His scheduled departure to Queensland next week, along with Larry Lincoln, has been delayed for a couple of weeks because of issues with the equine piroplasmosis testing.