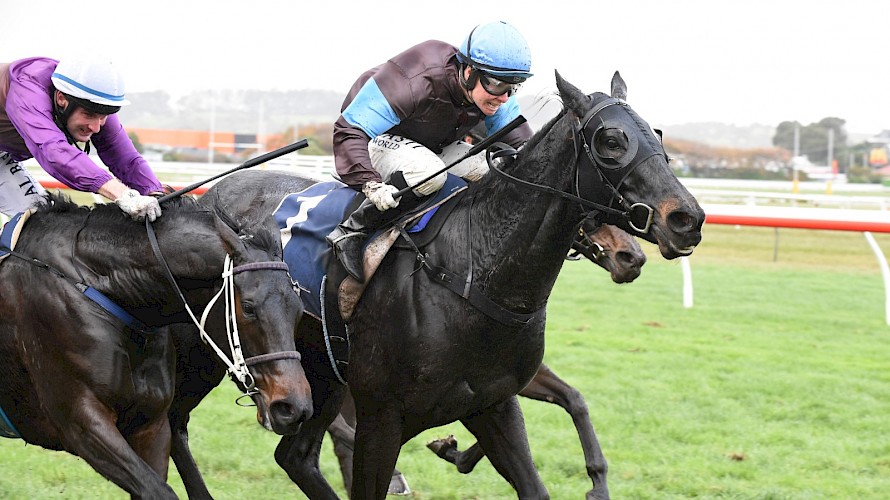 Platinum Rapper, left, gets within a long neck and nose of Dolcetto and Rosewood last year. PHOTO: Peter Rubery/Race Images.

And if the talented mare can win tomorrow’s Lincoln Farms Whyte Handicap it will be the second time in three days that John and Lynne Street’s powerhouse stable has won a race it sponsored. At Alexandra Park on Wednesday night Tommy Lincoln led all the way to win the Lincoln Farms Pace.

Latta was surprised to hear the TAB bookies had opened Platinum Rapper at $7.50, a distant third favourite behind Crowning Star ($2.30) and one of her other runners Rock Island Line ($4.80).

The mare has turned in two excellent efforts since resuming, finishing third and fourth, both times ridden by inexperienced apprentice Temyia Taiaroa.

“But she’s a tough mare who really needs a strong rider - last time when she saw clear air she ended up in front and she never usually leads.

“When I couldn’t get anyone else down here, I rang Sam to see if she would come down to ride her.

“We want a top rider for the Winter Cup and, while she’s not committing at this stage, it will help us get a good line on whether she’s worth taking down south.”

Latta is delighted with how well Platinum Rapper has bounced out of her two runs this prep - “even though they were quietish runs.”

“She has trained on well, looks fantastic, and I expect her to be right in the finish.”

Latta isn’t worried that the drying out heavy 11 ground will tie up Platinum Rapper - “she’s pretty versatile and handles most tracks.”

Platinum Rapper, the winner of four of her 18 starts, hinted at better things to come last year when she ran Dolcetto and Rosewood to a long neck and a nose in the Listed Challenge Stakes at Wanganui, run over tomorrow’s 1600 metres.

But in what will be the filly’s toughest test tomorrow, she is at very restrictive odds.

Last year’s Winter Cup winner Dez ($8) ran an improver’s third behind Crowning Star first-up but has to give Platinum Rapper 7.5kg on Friday.

Latta’s Rock Island Line is the winner of just three of his 30 starts but earns his tight odds through two good seconds this prep behind Sidebar and Happy Star.

“He likes the tracks when they’re drying out, like he’ll get on Friday.”

Latta also lines up Benny Lincoln for Lincoln Farms in the eighth race where he will be an outsider.

Benny Lincoln pulled hard in the running when first-up on July 4 and didn’t see out the 1400 metres so Latta has dropped him back to 1200 on Friday.

“He should find it easier with the track not so wet and, while his wide draw is not ideal, I expect him to be finishing it off well.”