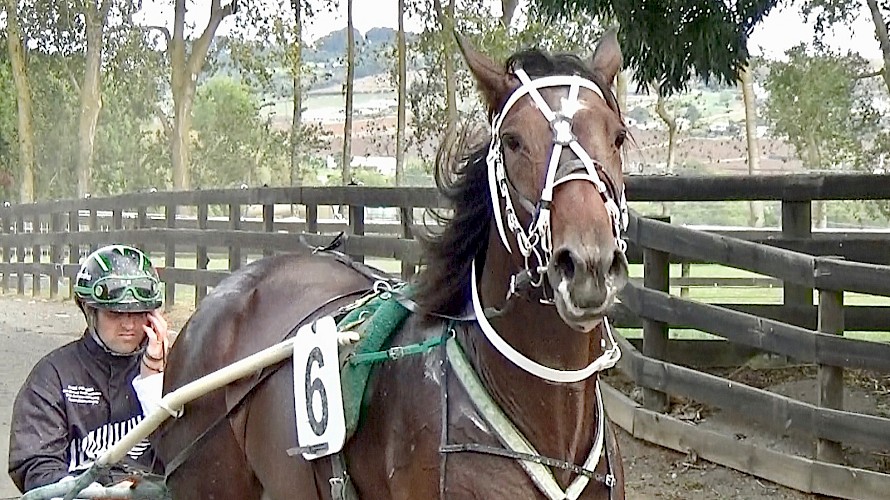 Sir Tiger has the right draw at Auckland on Friday night to make his mark before heading south to Christchurch next week.

The tradesman-like colt has drawn best of Lincoln Farms’ trio in the third race and from four on the gate has only three lesser performed fillies inside him.

Trainer Ray Green says Sir Tiger will need to put up his hand to justify getting on a flight south early next week where is qualified to run in the $170,000 Sires’ Stakes Final at Addington on Friday week. Sir Tiger is also ninth in the rankings for the $150,000 Two-Year-Old Emerald at the Harness Jewels on June 1.

“He doesn’t have to win but he’ll need to go a good race and pull up well.’’

Sir Lincoln colt Sir Tiger has placed in four of his eight starts, the latest at Cambridge on April 18 when he led, then trailed, before sprint laneing for second to Bad To The Bone in a Sires’ Stakes heat.

He looked hard fit last Saturday at the Pukekohe workouts when fourth to stablemate Copy That, staying hard on his back in the run home.

Copy That hasn’t raced for three months but showed again in that workout that he has the speed to handle Friday’s opposition.

And afterwards, driver Zachary Butcher said he thought the horse felt like he was ready to go close in a race.

With Butcher driving at Addington on Friday night, along with Tony Herlihy who handled the colt in his first two races, James Stormont will do the pinch hitting this time.

And while Copy That was drawn badly in seven, Green says that will allow Stormont to nurse him out, and stay out of trouble.

‘It won’t hurt him being a bit wide. We just need to see him get round safely but the ability is certainly there and all he needs is a good trip to go well.’’

The Sweet Lou gelding hasn’t raced since running fourth behind stablemate Line Up in a Young Guns heat on February 8, when regular driver David Butcher recommended he be turned out to strengthen up.

“He seems to have got stronger,’’ says Green.

“He’ll obviously be better with the run but he’s good enough anyway to do something and David knows him well.’’

Double Or Nothing mounted a strong run from last on the corner in a workout at Pukekohe last Saturday, and while four of Friday night’s rivals beat him home, driver Andre Poutama was very happy with how he felt.

The previous Saturday he had a more searching workout when he led before finishing second to one of the favourites for Friday night’s race, Infatuation.

Lincoln Farms’ only other runner on Friday night is Governor’s Bay in the sixth race where he has drawn well in three.

But the horse wasn’t able to keep up with the early burn from four last week when he got back, tried to improve four wide turning in, then hung in badly halfway down the straight, finishing sixth.

He meets another strong intermediate grade field on Friday night and would need to stay handy to the pace to be any chance.