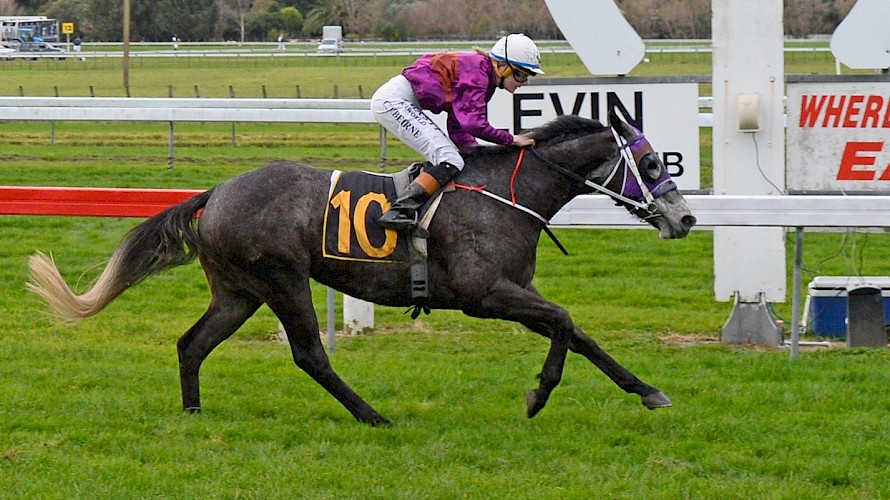 Platinum Volos will be ridden out the back at New Plymouth on Saturday to help him stretch to 1400 metres.

Trainer Lisa Latta is the first to admit that Saturday’s race at New Plymouth is not ideal for Platinum Volos.

But coming back from Riccarton’s straight six sprint with its long run home to the more on-pace Pukekura Park track isn’t her only worry.

For while the unpredictable grey unleashed a strong run for fourth from near last 300 metres out last time, suggesting he would like another 200 metres, its the 1400 metres on Saturday that is likely to be his biggest hurdle.

“We’ll have to ride him back last and look for runs through them to give him the chance to see the distance out,” says Latta.

Platinum Volos has placed only once in six runs at 1400 metres or further, contradicting his apparent full-of-running finish over 1200 metres at Riccarton.

The five-year-old looked like he was going to run last that day, rider Charlotte O’Beirne continually held up while trying to get out wider on the track.

But when he did see clear air in the last 250 metres he closed strongly to be only 3.5 lengths from Suggestive Loox, only the winner running a faster last 600 metres.

That style of running seldom reaps dividends at New Plymouth but Latta says she needs to take full advantage of the heavy tracks while they last “because he’s a wet tracker.”

Platinum Volos took a few days to get over his trip home from Christchurch after playing up in the float and rubbing his hips.

But Latta says the “softy” is fine now and ready to take on his seven rivals on Saturday, two of which are her own.

And in Rock Island Line, who has won on the course, and Yin Dragon, she thinks she has two better chances than Platinum Volos.

Topweight Yin Dragon might be 10 but he will enjoy a 3kg weight relief with Hazel Schofer on board. And Latta says he picks himself after a last start fourth in an open handicap at Otaki behind Mauna Kea, Taurus and Dr Watson.