Sorry, Hustler, but with a heart rate like that we’ve simply got to increase your workload

Frustrated trainer Al Barnes has upped the workload of Northview Hustler after he punctured and pulled up with a high heart rate at Albion Park last week.

But, faced by three serious and in-form rivals in Cruz, Our Uncle Sam and Sydney newcomer Bright Energy, Barnes isn’t expecting the Hustler to test the judge on Saturday night.

Barnes couldn’t believe it when, despite finding his favourite pacemaking role in the Lucky Creed, the Hustler was under pressure turning for home and weakened to run 15.5 metres last.

“But his heart rate afterwards was 115, when it should have been down to about 80, so it seems like it’s his fitness that is not where it needs to be.

“That sounds strange after he’s had five races back now but we’ve been trying to do the right thing by him and have probably just been too kind to him.

“We’ve tried to look after his joints by not working him hard and he’s done too well. He’s eating too well and is bigger than he’s ever been.”

Starting this week, however, Barnes has started dishing it up to the horse, hoppling him on both Tuesday and Thursday, instead of just galloping him.

“He’s obviously got improvement to make fitness-wise but even though his runs look disappointing on paper, he’s not going badly on the clock. He’s obviously not at his best but they’re going so fast.” 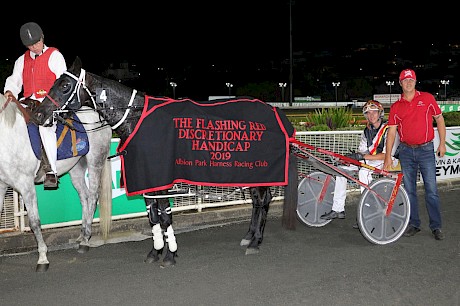 Albion Park races are much faster now than when Northview Hustler won the Flashing Red last year. PHOTO: Dan Costello.Winner Kid Montana posted a mile rate of 1:56.5 in winning last week’s 2680 metre feature, compared with the Hustler’s 1:57.3 for the slightly shorter 2647 metres when he won the Flashing Red in his Australian debut in May, 2019.

Three starts back the Hustler recorded the second fastest closing sectionals in the Wondai’s Mate, sizzling home from the back in 53.63 and 25.98 and could run only eighth.

On Saturday night the Hustler is favoured with another front line draw but from five Barnes says he can’t see the horse being able to cross Maywyn’s Best inside him.

And he knows where the horse will finish if he’s forced to breeze on a 1:51 mile.

Cruz, winner of both the Wondai’s Mate and Mr Feelgood, is set to start a hot favourite but he should be seriously challenged by Our Uncle Sam and Bright Energy who boasts a 13 wins from 22 start record for Craig Cross.

Bright Energy, who is fresh, paced a 1:49.8 mile at Menangle in February and recently trialled there in 1:52.6.

Barnes is looking forward to the interstate horses going home but says he’ll just get the Hustler into the routine of consistent work and weekly racing.

“It’s frustrating but at least he’s sound and has no problems so we’ll keep trying.”