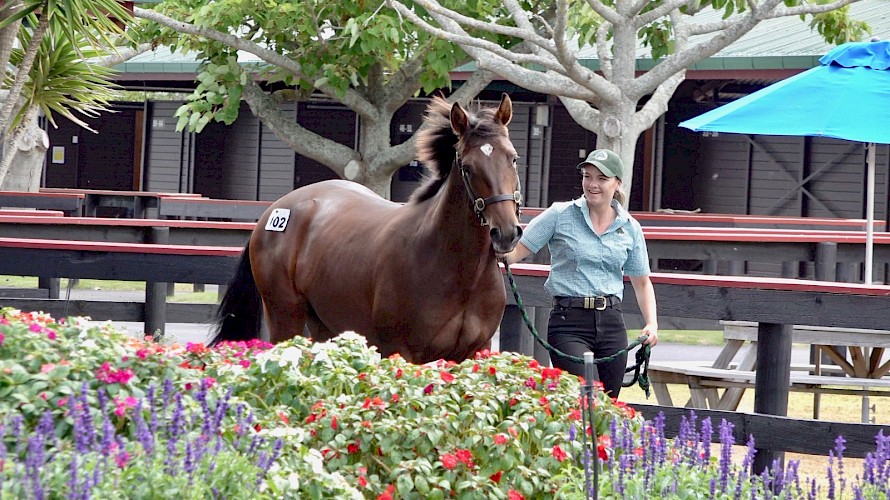 John Street paid $200,000 for this Bettor’s Delight colt out of Jessies Cullen, consigned by Woodlands Stud.

Street and Green snare three cracking colts at Karaka including the priciest at $200,000

New Zealand Bloodstock has delayed its Christchurch sale by one week following the move in Covid alert levels. Selling was to have started on Tuesday and Wednesday.

Lincoln Farms’ trainer Ray Green could not have been happier today walking away from New Zealand Bloodstock’s national yearling sale at Karaka with three cracking colts.

Owner John Street and Green bid on only three lots, all consigned by Woodlands Stud, and secured them all, including the top priced Bettor’s Delight - Jessies Cullen colt for $200,000.

Rated the standout of Woodlands Stud’s draft by stud master Tony Grayling, the colt strutted round the sale grounds as if he owned them, yelling out repeatedly. 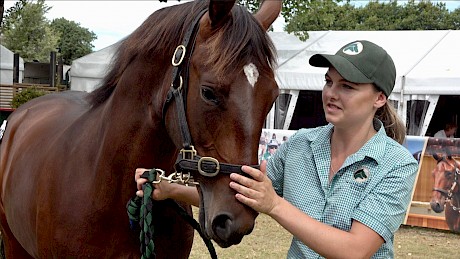 Lot 102 was Woodlands’ stud master Tony Grayling’s top pick and he fetched $200,000, the highest price for a colt.“He certainly likes to be noticed,” said Green. “He’s a beautiful big strong horse and I couldn’t fault him.”

Bred on the golden cross of champion stallion Bettor’s Delight over a Christian Cullen mare, the colt is the fifth foal of nine race winner Jessies Cullen.

His first two foals to the races Princess Jessie and Rosies Delight have both won and second dam Jessie Grace was a prolific producer of 11 winners including Nad, Pazam, Chatham Grace and Pacing Grace.

It’s the family of big winners Pacing Major, All U Need Is Faith and (Our) Amazing Art, and features recent top three-year-olds Aladdin and Lincoln Farms’ own star American Dealer.

Green said the colt was one of two classy types at Karaka which Street was determined to buy and he had plenty more dry powder had he been pressed further by underbidder Robert Dunn. 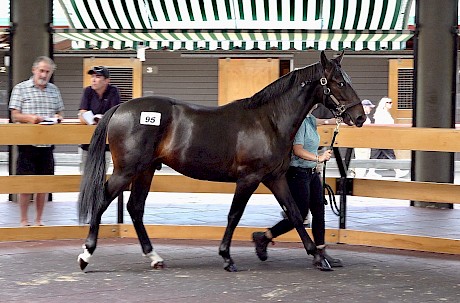 He is only the second foal and first colt out of the 2014 New Zealand Oaks winner Ideal Belle who is a half sister to triple Group I winner Five Card Draw, both of whom were trained by Barry Purdon.

Second dam Blistering Belle had nine to the races for nine winners.

“They’re both lovely horses, I thought the two best in the sale,” Green said.

“I’m very happy to be taking them home and the other colt, while more expensive than we hoped, is also a beauty.” 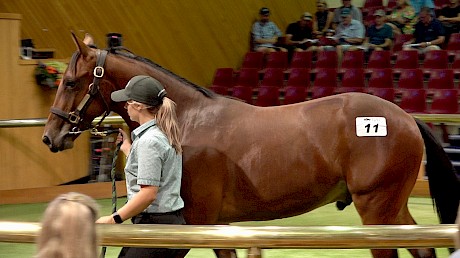 This brother to millionaire (My) Hard Copy cost Lincoln Farms $90,000.Street had to go to $90,000 to buy the American Ideal - Readallaboutit colt but given Lincoln Farms’ experience with the family it’s not surprising he exceeded his budget.

“We’ve had three full brothers so it didn’t take much for us to dive into the fire again,” Green said.

The family headliner (My) Hard Copy, who Green’s wife Debbie bought as a weanling for just $4500, won more than $1.24 million in Western Australia.

Street might have bought only three yearlings today but he has a bigger shopping list for Christchurch where a number of fillies took Green’s eye on his recent southern tour.

“It’s a good start and I couldn’t be happier,” Green said.

Prices at the upper end of the sale today were strong with nine fetching more than $100,000.

The top price of the sale was $300,000 paid by Stonewall Stud late in the day for an immaculately prepared filly from the draft of Logan Hollis and Shane Robertson. By Bettor’s Delight from 23-race winner Major Reality, she is a half sister to Kiwi headliners Ultimate Sniper and Ultimate Machete.

The top trotting colt, offered by Breckon Farms, fetched a whopping $190,000 to the bid of Peter Lagan, on behalf of Sydney’s Emilio Rosati.

By What The Hill out of Regal Volo he is related to big winners (Our) Twentyten, High Gait and Alannah Hall.

The strength of the sale delighted NZB director and operations manager James Jennings.

“We have had a phenomenal start to our yearling sale, with significant rises in all key metrics.

“Our aggregate has increased by 23 percent, while our average and clearance rate increased 10 percent on last year’s figures 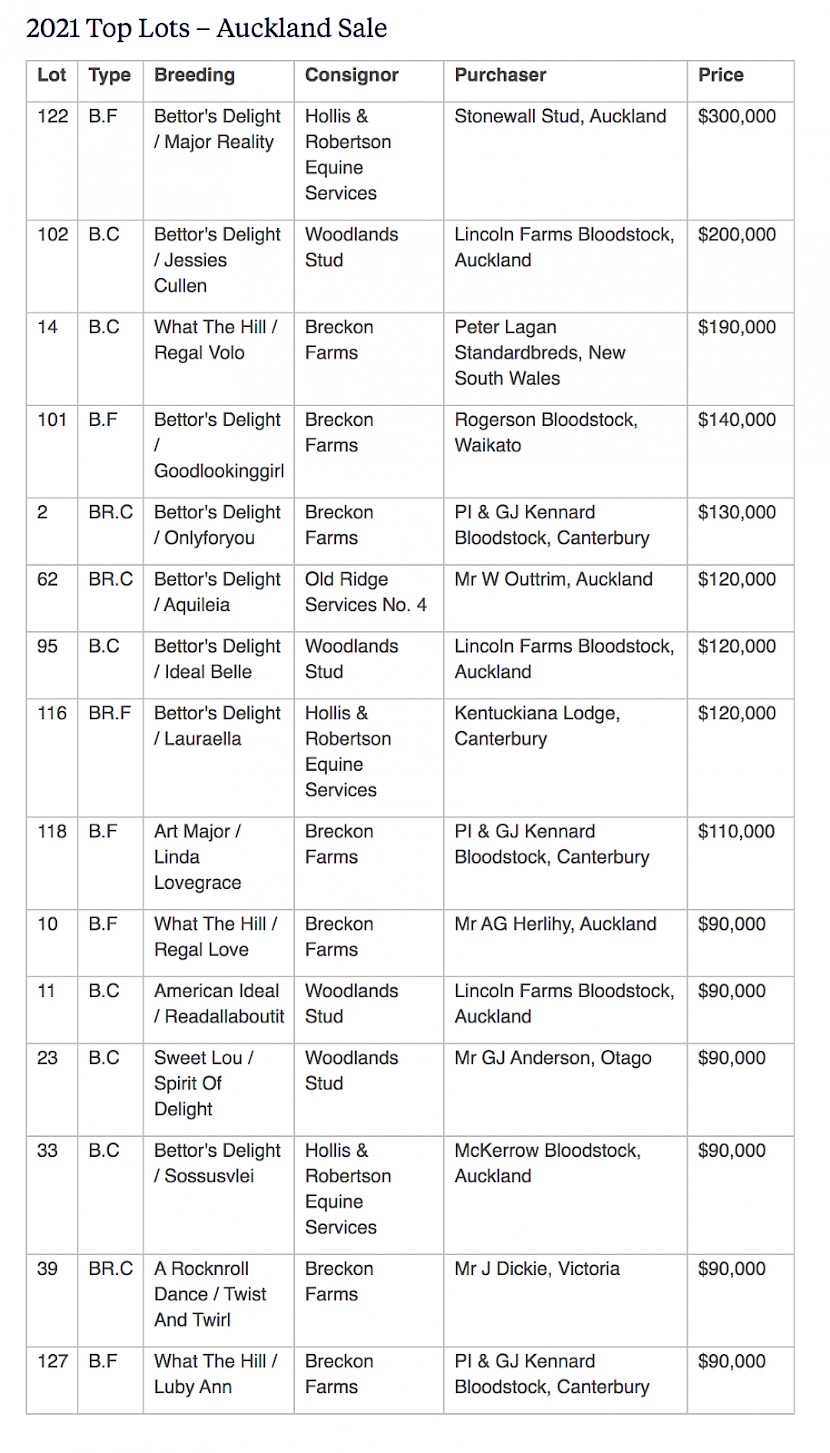