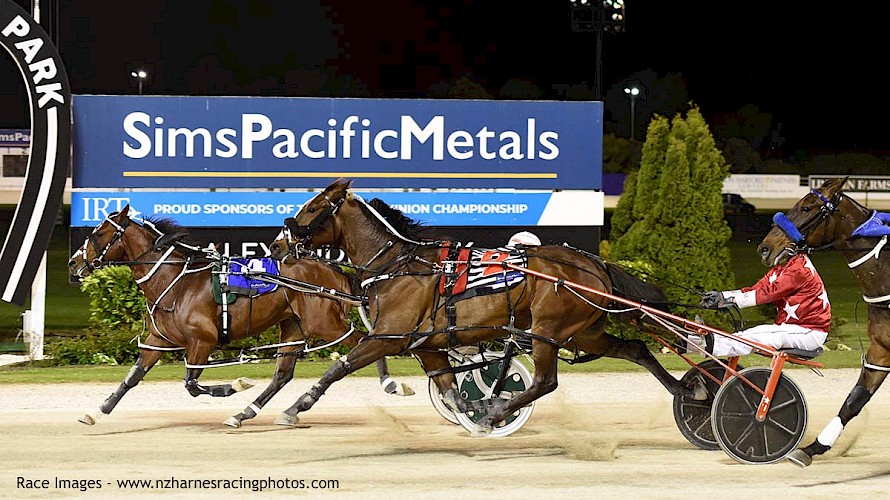 Copy That has South Coast Arden well covered at the finish of the Holmes DG. PHOTO: Megan Liefting/Race Images.

$201 Check In, On The Cards, Triple Eight, Vintage Cheddar

Copy That’s Holmes DG triumph at Auckland showed punters he was right on track for the New Zealand Trotting Cup - but it was a phone call several hours before the race that pleased trainer Ray Green the most.

Green had been almost resigned to missing a key lead-up race at Ashburton on October 26 because the only flight south was scheduled for November 4 and he didn’t want to subject the horse to a gruelling two-day road trip.

But when cup sponsor IRT called Green to tell him a flight was now on for October 22 it made his job of preparing the horse for the $540,000 feature that much easier.

“The timing of the new flight is just perfect. It’s at mid-day, which means he can jog that morning and be in his new stable by 3pm.

“And he can now run in the Ashburton Flying Stakes and possibly the cup trial (November 4) if he needs another hitout.”

Copy That, who has slipped out to a $4.60 third favourite for the November 10 cup, was right back to his dominant best at Alexandra Park on Friday night, the win never in doubt after he looped the field to lead with just under a lap to run.

The little powerhouse sprinted clear early in the run home and at the post had a neck margin on South Coast Arden whose driver Brent Mangos had trouble activating the plugs in the run home.

Green knows the knockers will claim he should have beaten a four-win horse more easily. And he can just hear them questioning how Copy That will cope with a tough 3200 metres when he was tiring at the finish of 2700 metres just a month out?

“Yes he was getting a bit tired but I expected that. He hasn’t had to run 2700 metres for quite a long time and he’s still a bit porky.

“I can guarantee he’s not on top of his game yet - he blew up a bit after the run. When he went down to Christchurch for the Derby last year he was quite light. 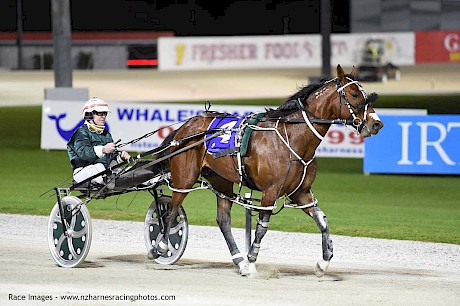 Maurice McKendry brings Copy That back. PHOTO: Megan Liefting/Race Images.“I can’t see how anyone could be critical of the run - he had to do a bit of work from 30 metres and he’s gone 3:18.”

Driver Maurice McKendry reported Copy That paced much more freely than when pipped in the Spring Cup at his previous start, an issue subsequently rectified by routine vet work.

“Maurice said he was a bit shaky round the first corner but after he gave him a slap on the arse he was good.

“I was toying with the idea of putting his pole back on but we tried him in a rein burr instead and that seems to have done the job.

“I’m sure he’ll be even better next time but it’s hard to weigh up the northern and southern form. We’ll find out soon enough.”

Green and owner Merv Butterworth have resolved to concentrate on the cup and won’t be asking Copy That to race again three days later in the $180,000 Free-for-all (1980m) on Show day.