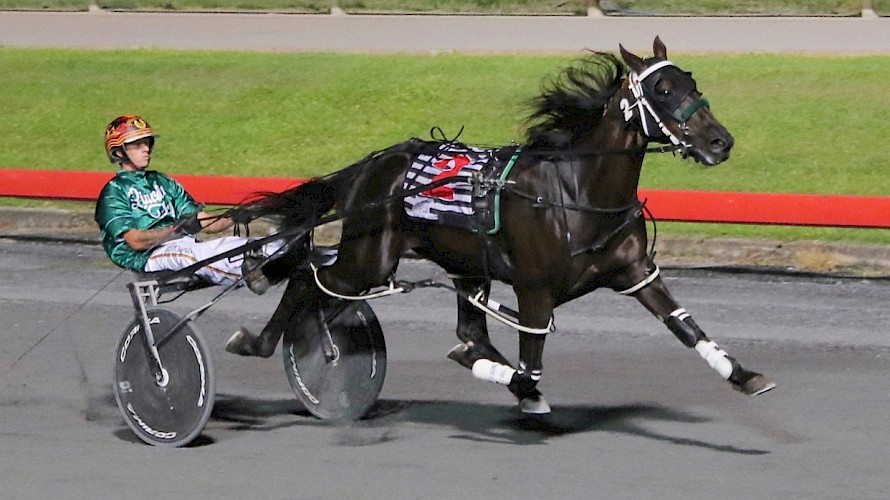 Hayden Barnes, sitting in a short cart, has The Hustler airborne and well clear near the finish. PHOTO: Dan Costello.

The Hustler gets back his respect with sizzling all-the-way 1:52.5 win at Albion Park

Northview Hustler ran the fastest time of his career in his sizzling all-the-way win at Albion Park tonight, a performance which trainer Al Barnes says is sure to earn back his respect.

“Everyone thought he was all done but he’s actually been racing super - against far better horses,” Barnes said.

Determined to take advantage of his two gate tonight, Barnes instructed his son Hayden to really wake the horse up in his preliminary. 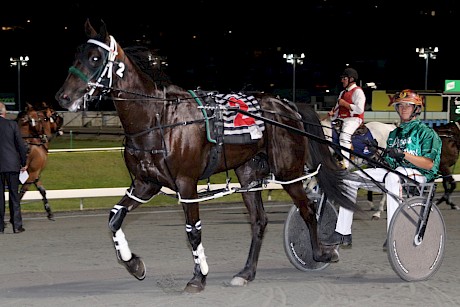 Hayden Barnes brings Northview Hustler back to scale after one of his best wins. PHOTO: Dan Costello.And he fitted a shorter cart to the Hustler to get Hayden closer to the horse to reduce the wind resistance.

“I told Hayden to be aggressive and to let him lead. And while it looked like he was nearly crossed by Secretagent Tycoon, who got half a length on him, Hayden had him covered easily, he just didn’t want to go any faster.”

After a slick opening quarter of 26.8, the Hustler got a breather in the second section with a 31 then, despite being held back to the field, he ripped home in 27.8 and 27.

They’re similar fractions to those the Hustler has posted in his last four runs but crucially, they were from the second row and barriers six (twice) and seven.

“His form line doesn’t reflect how well he’s been going. I’ve just been waiting for all the good ones to go home.

“He’ll keep earning money now and hopefully he can put some wins together.”

While the Hustler won only one race in 2020, and has not won for four months, Barnes said the horse was finally sound.

“He wants to do it, and he’ll keep racing. He’ll start next week then have a week off when we’ll do some maintenance on him.

“I’m rapt with the win tonight, especially because so much work and effort goes into him.”

The Hustler, who was sixth favourite in the seven-horse Remembering What A Charmer Pace and paid $10.30 on the tote, was credited with a 4.2 metre margin over favourite Major Cam, with another 2.5 metres to Chevron’s Reward.

It was the 15th win of his career and despite being seven, one of his best.

Northview Hustler has them strung out at the line, with favourite Major Cam closest.