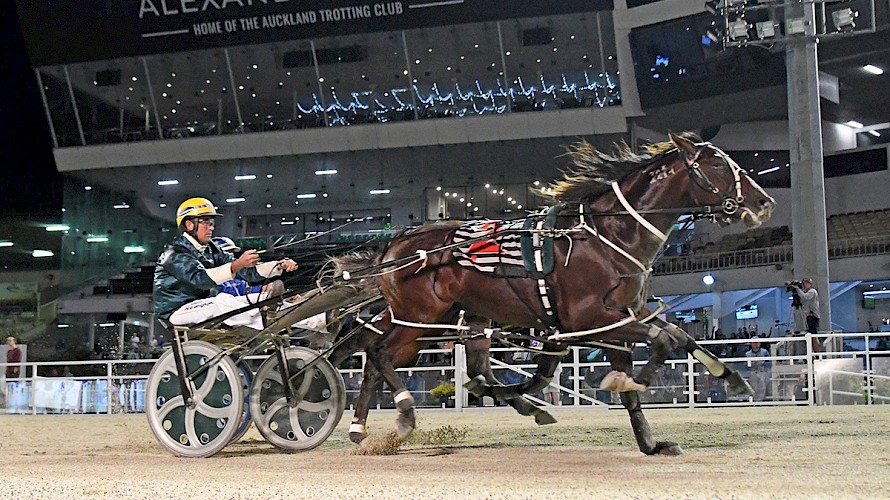 American Dealer looks the pick of the deck for Lincoln Farms at Auckland on Wednesday night but trainer Ray Green warns all seven of his team will benefit from the run in their first outing post the COVID-19 lockdown.

Green has scratched a slightly off colour Tommy Lincoln from the fourth race but still lines up three strong chances in American Dealer, Larry Lincoln and Man Of Action.

“All three of them have been trialling well but it’s their first run for a long time so I can’t label any of them. 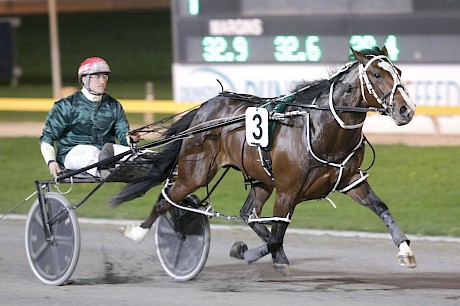 Driver Zachary Butcher is almost asleep in the cart as Larry Lincoln strolls home on debut at Cambridge last October. PHOTO: FokusPhotography.“But I like American Dealer as a horse and he’s likely to take the most improvement out of his latest trial because of his temperament. He’s a more laid back individual and is more versatile than Larry Lincoln.”

American Dealer ($2.90) was super in his debut win at Auckland last February, running down the All Stars’ It’s All About Faith in a 1:56.9 mile rate. And he was also very brave in the Young Guns final a week later, forced to sit parked throughout when fourth to Krug, It’s All About Faith and Platinum Stride.

He looked a real improver at the Pukekohe workouts last Friday when mowing his rivals down wide out.

Larry Lincoln ($4.80), while also a smart debut winner, met weaker opposition at Cambridge last October, leading most of the way and scoring, untested, by three and a half lengths.

Green spelled the Sweet Lou colt immediately as he was feeling his joints and says he has shown no signs of soreness this time in.

“Larry’s very fast and he’s as forward as the other fella but I don’t know how tough he is yet.” 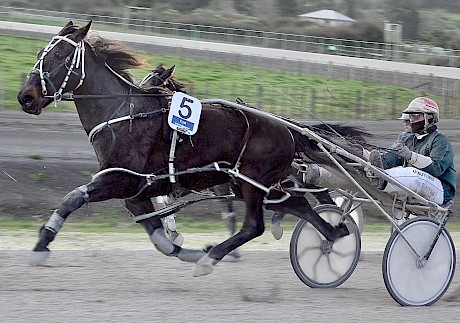 Man Of Action trials strongly at Pukekohe. He could be overlooked on the second row on Wednesday night.Green warns not to rule out Man Of Action ($7.50) either, even though he has a poor second row draw.

‘We chucked him in the deep end with the bear cats in his last few runs and I think he’ll go well in this field. He’s on the up and is a much stronger horse now.”

Fifth in the Derby Prelude behind Copy That and last in the Derby behind Amazing Dream, Man Of Action beat all but LL Cool J in his last start in March.

Green warns not to think Copy That ($2.90) is over the line in the seventh race, even though he’s the best horse in the race.

Copy That, with Maurice McKendry in the sulky, will line up on 45 metres in the seven-horse field, and gets a 10 metre head start on Barry Purdon’s On The Cards.

The last time the par met in Copy That’s first standing start, which he handled with aplomb, he had a 15 metre head start and beat the other horse home by more than four lengths.

“He’s the class horse of the field but he won’t be on top of his game yet,” says Green. “It will take him a couple of runs to get back to where he was pre-COVID.

“I’ll be instructing Maurice not to send him on a mission, especially as it’s over 2700 metres. He’ll still go well but I’m not expecting him to just line up and win. I couldn’t label him first-up.”

It will be Copy That’s first race since March 20 when he beat One Change in the Vero Flying Stakes at Addington, bringing his record to eight wins from just 18 starts. 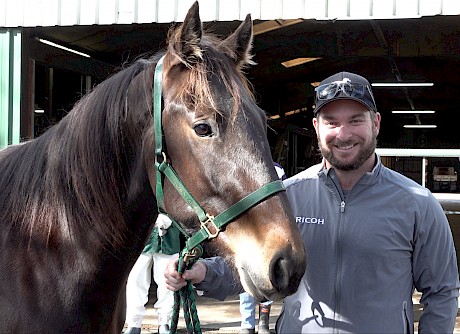 Top golfer Ryan Fox will be at the Park to watch Franco Nandor race, along with Gareth Paddison who won a share in Captain Nemo.Golfers eagle-eyed in the stand

Both will be at the Park to see their new charges but Green says he can’t promise instant success.

With Captain Nemo drawn five and Franco Nandor six, and the favourite Marathon Man in the pole, they’ll need luck on their side, says Green.

“Both are nice colts - there’s not much between them - and I expect them to develop into tidy three-year-olds.

“Franco Nandor has won his last two workouts and Captain Nemo has been going well without winning.

“But there are a couple of others in there that go nicely too.”

As well as Marathon Man, who ran second on debut to the well regarded Hot And Treacherous, Tony Herlihy lines up Prince Of Pleasure, a smart winner over Captain Nemo at the Pukekohe workouts.

Apieceoflou ($34), who finished fourth in that workout, should get his chance from gate three on debut but Green says he’s really only in the field to get experience.

“He’s not up to the other two at this stage. He’s a big, slow maturing horse. He keeps improving without being spectacular but he’s a real trier.”