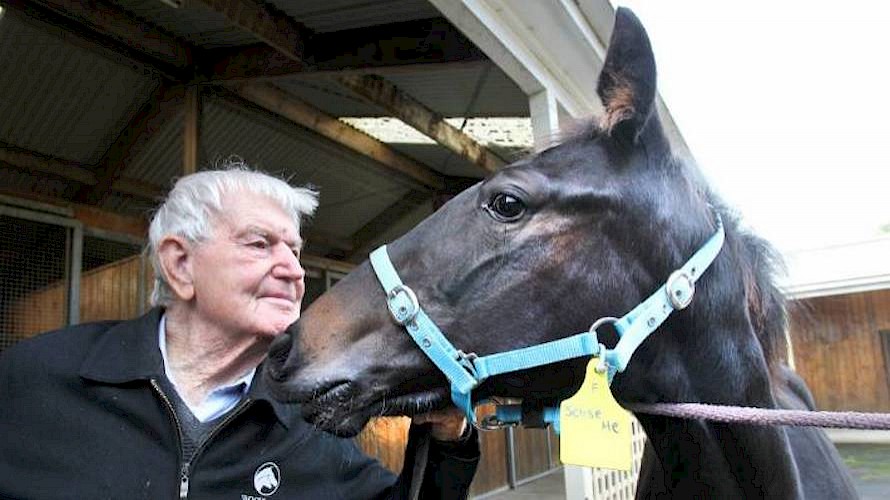 Charlie Roberts was driven by success and achieved it in many fields.

Vale Charlie Roberts, 96, a hard worker who leaves a terrific legacy of success

A driving force particularly in New Zealand harness racing for more than 60 years, Roberts died peacefully at the South Auckland nursing home where he had been in dementia care for the last three years.

Son-in-law Paul Kenny said Roberts had been doing well since the COVID-19 lockdown but staff had trouble rousing him this morning and he went downhill quite quickly.

“He’d done that a few times in the last few years but he’d managed to pull out of it each time.

“And that’s what he was like all his life, he was a very determined man, determined to keep doing what he wanted even when it sometimes wasn’t in his best interests.”

Roberts once discharged himself from hospital to see Adore Me contest the Auckland Cup, steadfastly manoeuvring himself around Alexandra Park with his walker and his long time helper Jack Moore.

Charlie Roberts with leading trainer Mark Purdon.Kenny said Roberts had a very single-minded approach to everything he tackled, whether it was farming, his veterinary practice or breeding, both standardbreds and thoroughbreds.

“It was black and white for him, with not much in between, and so many people who make a success of things in life are like that.

“He was very successful at any type of farming but was a great advocate of dairy farming for production and at one stage had the highest producing cow in the country.

“Being a vet was his biggest love in life but he also took enormous pleasure out of his stallions.”

With fellow vet Andrew Grierson, who joined Roberts’ Takanini practice in 1978, he established Woodlands Stud and in the last 27 years developed it into the premier stud in the country, standing champion sires like In The Pocket and latterly Bettor’s Delight. 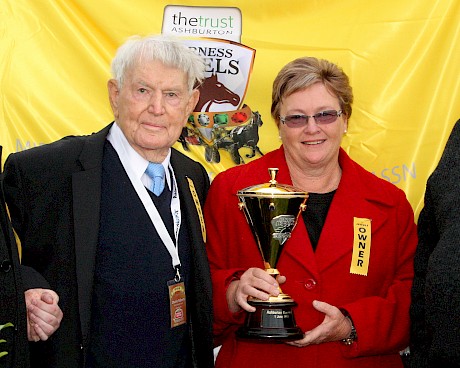 Roberts with daughter Mary after winning at the Harness Jewels.Work ethic

Grierson recalled tonight how Roberts’ work ethic rubbed off quickly on him.

“He believed there was never an easy way to make money expect for working hard.

“His family owned part of Pakuranga and he worked that hard as a farmer he turned a small fortune into a huge fortune.

“When we set up Woodlands he provided the financial backing and he backed me on a lot of my decisions. Without Charlie, Woodlands would never have happened.

“I know he’d be so pleased with the legacy he’s left as he loved to succeed. That was his driving force all his life.

“He could be very generous but also prickly at times. He blamed that on being a red-head when he was younger.”

Roberts’ first involvement in horses was in harness racing and soon after he married June he went to the United States to work for the legendary Delvin Miller at the Meadowlands, at the time when he had the great pacer Adios. 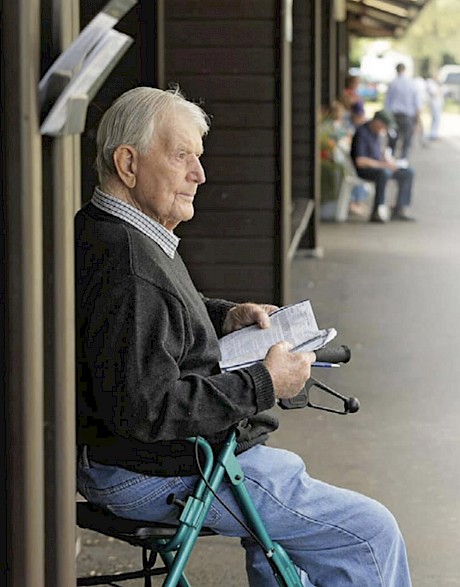 Roberts was a familiar sight with his walker in latter years, pictured here at the Karaka sale yard.Kenny said it was only later that Roberts moved into breeding thoroughbreds and incredibly he remains the only person to be named Breeder of the Year in both the standardbred and thoroughbred codes.

He bred 1967 Auckland Cup winner Royal Sheen and later 1980s Group I winners, Fothers and Australian winner Penny Edition. He was a life member of the New Zealand Thoroughbred Breeders’ Association and served on its council for many years.

He became an expert on the reproductive aspect of breeding and nearly seven decades ago he helped set up the original swabbing procedures in racing.

Roberts, who was inducted into the Hall Of Fame, was a regular winner at the annual Harness Racing Awards and in 2013 won five trophies including Owner and Breeder of the Year, as well as awards for his champion stallion Bettor’s Delight and broodmare Scuse Me and top filly Adore Me.

He raced top liners like Miracle Mile winner Christen Me, Adore Me, Dream About Me and Sweet On Me, sharing in the success in latter years with Kenny and Roberts’ daughter Mary.

“Charlie was very fond of his trophies and after he brought home Adore Me’s New Zealand Cup he didn’t let it out of sight for 12 months.

“She was one of his favourites, an amazing horse who had an injury-curtailed career.” 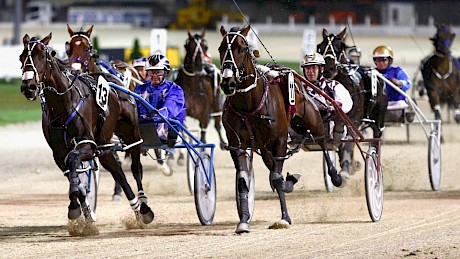 Roberts’ proudest moment as an owner as his two great pacers Christen Me, right, and Adore Me fight out the 2015 Auckand Cup.Proudest moment

But it was the memorable Auckland Cup clash between Christen Me and Adore Me in March, 2015, that Roberts described as his proudest moment as an owner.

The pair locked horns down the home straight at Alexandra Park, just a nose separating them at the finish with Christen Me obliterating the New Zealand record for a mobile 2700 metres by two seconds.

Roberts, then 91, said after watching races all his life he rarely got too excited.

And later, in the victory circle, he told the crowd: “If you think I’m done, I’m not. 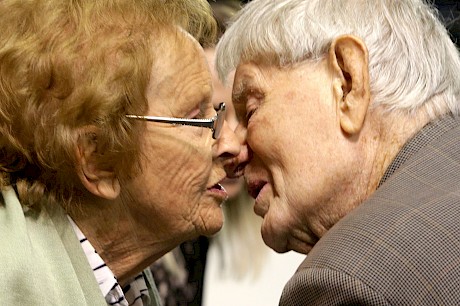 Roberts kisses his late wife June after a big win at Alexandra Park. PHOTO: Trish Dunell.“I’ll be back with more horses until I die and then my family will carry them on and New Zealand will have the benefit.”

Kenny says for all his success, he’ll remember Roberts for being a terribly hard working man.

“He worked long days for a long time.