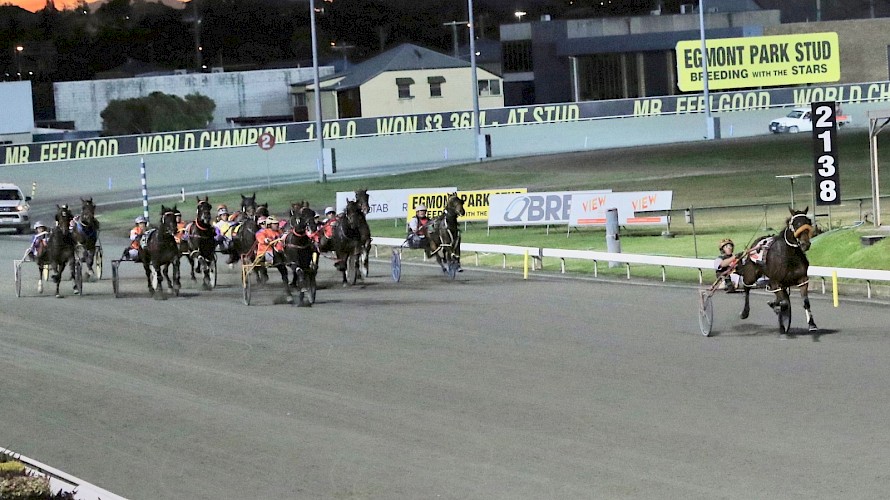 Vasari and Hayden Barnes annihilate their rivals at Albion Park in 1:52 flat in May. PHOTO: Dan Costello.

Vasari opens his account in New York with a 1:52.3 mile at Saratoga - and he jogged it

Vasari has made a flying start to his American career with a dominant win at Saratoga in New York.

The former Lincoln Farms pacer, now trained by Paul Zabielski, started second favourite on Saturday and the result was never in doubt, the commentator declaring he jogged the mile as he hit the wire in 1:52.3.

Vasari started from two on the gate and was driven aggressively by driver Jim Devaux to cross the pole runner Delightful Joe after an opening 400 metres in 27.1.

Devaux kept his foot down throughout, clocking the next sectionals in 28.3, 28.1 and 28.3, finishing with something in reserve.

Run for a stake of US$11,000, the race was the first for Vasari’s new Saratoga Springs owner Keith Quinn since he bought him from Lincoln Farms’ John and Lynne Street and partners Ian Middleton, Rod and Sue Fleming and Peter Jeffares in late August.

The six-year-old flew to the States in the form of his life, with three wins and a second in his last four starts at Albion Park.

His 86-start career down under saw him bank A$150,000 from 16 wins, five in New Zealand for Ray Green, and 11 in Australia for first Sonya Smith and Anthony Butt in Sydney then Al Barnes in Queensland.

Barnes predicted on his departure that he would be ideally suited to the go-hard style in America, tactics which saw him clock a 1:52 flat mile at Albion Park in May when winning by more than 17 metres.

You can see the race on the following link - https://saratogacasino.com/race-replays/- just click on Saturday the 5th and then race 4 to view.