Trainer Robert Dunn will be aiming to keep Sir Lincoln mare Onedin Reign in the top 12 for the Harness Jewels after her powerful Waimate Cup win on Sunday.

The four-year-old rocketed to 10th on the list for the Four-Year-Old Diamond at Addington on June 1 when she notched her third win of the season.

And while two of those wins have been on grass, Dunn says she’s equally as good on all-weather tracks.

“We thought we’d keep her on the grass while she’s doing so well. She’s gone past our other two Feel The Money (12th) and Kotare Cullen (13th) in the Jewels rankings and there are a couple of country cups to come.’’

A big, strong filly, who was big as a yearling and two-year-old, Onedin Reign had a few niggly problems which held her up earlier her career.

“Her breathing was pretty raspy initially and we used a Cornell Collar on her for a while. Young horses can get funny in their breathing as they’re maturing but she doesn’t need it now.

“She does tie up every so often though and we’ve got a routine to keep that under control.’’ 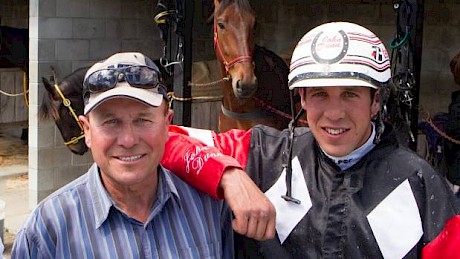 Trainer Robert Dunn, with son John who drove Onedin Reign.The mare doesn’t have any days off, or jog days, a half mile daily workout instead keeping her free in her action - “on and off the track in eight minutes is the key.’’

“She’s getting over it, she was a lot worse as a three-year-old.’’

Dunn says Onedin Reign has always shown a lot on the track - “as a yearling and two-year-old we always thought we had something pretty good.

“And when you work her now she’s a strong horse to sit behind. We always thought she’d go a fair bit further as she’s a great follower of pace.’’

Dunn was impressed how Onedin Reign toughed it out at Waimate on Sunday after making a long run round the field to lead 700 metres out.

Hotly challenged all the way down the stretch by stablemate Spot On, who came up the inside, she hung on by a head, thanks to a vigorous drive by driver John Dunn.

Onedin Reign is raced by her breeders, brothers Terry and Garry Lane, Terry a full time worker for Dunn for the last 10 to 15 years and Garry aka ‘Billy’ one of the top drivers for Majestic Horsefloats for the last 20 years.

She is the second foal of the Bettor’s Delight mare Onedin Classic who looked “incredibly promising” winning two of her first three starts. But she raced only nine times, having to be retired when badly injured in a race crash at Addington in July, 2012.

Her first foal Onedin Express, by Changeover, did not win in 21 starts.

The Lanes were always fans of Sir Lincoln as a racehorse so choosing the Alabar-based sire to toughen up the mare’s progeny was a no-brainer.