Platinum Spirit needs to win the last race at Otaki on Monday if he is to have any chance of making the field for the $250,000 Wellington Cup.

Lisa Latta’s promising stayer is the lowest rated of the 36 horses nominated for the 3200 metre feature on January 30 but will have two chances to elevate his claim.

Monday’s rating 65 event is the first, followed by a rating 74 2200 metre event at Trentham on Telegraph day, January 16.

“He’s much better than a rating 65 galloper and I expect him to be hard to beat on Monday,” Latta said.

“His last run was great and he has come on from it really well.” 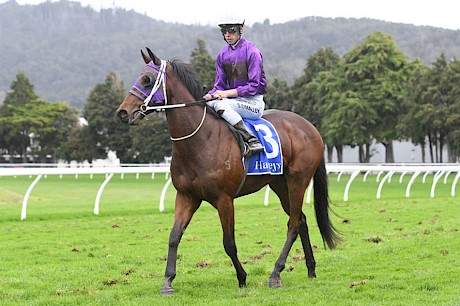 It was the run of a real stayer, as he was angled straight across to the rail at the start by rider Ryan Elliot, and did not start his run until 600 metres from home.

Elliot picked a path through the field in the straight and was doing his best on the line, just half a length and a neck from the winner.

Latta said the run held even more merit as “they were winning up on the speed that day.”

Latta expects to see the best of Platinum Spirit at Otaki, when he will be having the fourth run of his preparation and should get conditions to suit.

“We had some rain overnight and the track was a dead 5 this morning so it will have the fire out of it, which is perfect for him.”

Should Platinum Spirit miss the cut for the cup, Latta says there are plenty of options for him including the Summer Cup, a rating 82 2400 metre race he ran third in last year, signalling his staying potential.

Latta is also predicting another good run from Platinum Bordeaux in the sixth race, despite her very wide draw.

“She has drawn 19 but they are only running 14 so she will come in with the ballots and, because she gets back in the running, I don’t think this will be too much of a concern.

“She has trained on well and, with luck in the running, I expect her to be right in this.”

The Per Incanto mare was a last start third on the course over 1600 metres, when the going was a good 3, and would enjoy the sting out of the track.

Ashvin Goindasamy takes the ride, claiming down to 55.5kg.