Owners can’t share the sulky with their driver in a race but the next best thing is to see how their horse performed through the driver’s eyes.

And what better race to enjoy that vision than last Saturday night’s Redcliffe Gold Cup when in a thrilling finish Northview Hustler was pipped in the last stride.

In the video above, Lincoln Farms and its partners can watch Hayden Barnes’ every move on the Hustler, thanks to Racing Queensland and Panasonic Studio Productions which hooked him up with a camera.

In the description that follows Barnes takes us through the race from the moment the tapes released:

“My first plan was to get inside the No.1 horse. It was having its first standing start and in its trials it had stood flat-footed. I thought if I stepped fast enough I could get inside it, but it stood there, then jumped left and got in my way again.

“Once I got around it, Hustler went really quickly and we slotted into the running line. 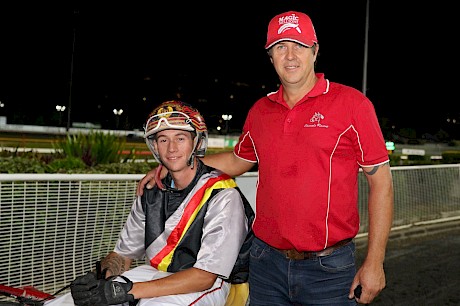 Driver Hayden Barnes with his trainer dad Al.“I was waiting for them to back off just enough so I could get going (around them) but they just kept running (at track record pace).

“I wanted to be the first horse three wide because last year in the same race I left it too late and they came out in front of me and got in my way.

“When I took off (three wide at the 900) on Saturday he cruised his way up there and was really travelling. And when I took over before the turn I thought he’d bolt in.

“I could feel him getting tired halfway down but when he saw the other horse (Sole Ambition) coming he pricked his ears and dug in even more.

“You don’t get to drive horses who try that hard too often but he just ran out of condition that last little bit and I could feel him pulling up.

“I hate getting beaten on the line like that and maybe I should have sat up for 50 metres before I let him go.

“But the really good thing is he’s still got a lot of improvement in him. His heart rate when we first took it after the race was 97 and after he was swabbed it only came down to 94 which shows how much fitness he still has to go.

“Quite a few people have said to me he’s come back a different horse this time and the way he’s racing you have to agree.