It’s hard to fancy Darci’s Boy on his thin record but trainer Shane Baertschiger is tipping he’ll run a bold race in this first start for the stable at Kranji on Friday night.

When Baertschiger took over the six-year-old a couple of months ago he came with an ordinary CV of two wins and four placings from 31 starts and looked “ordinary and fat.’’

But he is happy with the way the horse has progressed and after a pretty tidy trial a week ago even rates him a winning chance in the 2am NZ time race.

“The 1200 metres on the polytrack is short of his best but the way he trialled you have to like him a bit.’’

Planted three wide all the way Darci’s Boy cruised up to the two inside him in the straight and finished a close up third, never asked to extend by rider John Powell.

On Friday night Powell will jump the horse from gate eight and Baertschiger says he’ll have time to work across and get up on the speed.

“I’m happy with the draw, it’s only a mediocre field, and I expect him to run well.’’

When Darci’s Boy scored last July it was 16 months after his maiden win and came at 1600 metres. He placed at 1000 metres on the poly in his second race start in October, 2016 but has has failed in five subsequent races on the artificial surface. 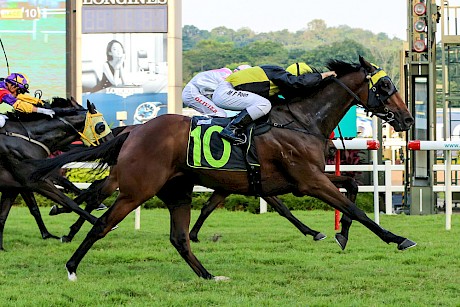 Silent Prince pictured winning last August. He is expected to need the run when resuming on Friday night.Luckily, or more correctly by design, Lincoln Farms’ stablemate Silent Prince will not be racing on the poly on Friday night because he simply hates it.

He failed to hit out at all on the polytrack when trialling over 1000 metres last week, beating only one home.

On Friday he resumes over 1400 metres on the turf short course in the final race at 3.05am NZ time.

“He’s in need of the run and from 15 at the gate he’ll go back to second or third last.

“I just want to see him working home nicely.’’

Silent Prince, a four-year-old by Casino Prince, has already earned S$91,518, winning twice and placing four times from his 19 starts.

Baertschiger reports promising galloper Lincoln Moonlight is back in the stable but has not had a gallop yet.

“He’s a couple of months way from being ready.’’