Drawn to lead and with only five rivals, Northview Hustler will get his chance to score again at Albion Park on Saturday night, says trainer Al Barnes.

The last time Northview Hustler led, four starts back, he won, clocking a mile rate of 1:52.5 for the 1660 metres, only four tenths of a section slower than last week’s brilliant winner Turn It Up.

At a casual glance the Hustler might not have looked so good in that race last Saturday but his performance belied the sixth placing.

“His sectionals were brilliant,” says Barnes. “And he was running them wide on the track.” 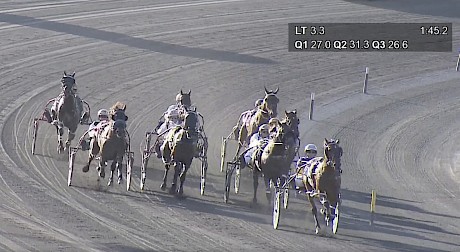 Northview Hustler, widest at the back, unleashing his brilliant last 400.Forced to go back from a wide draw, the Hustler was still last, and three wide, at the 400, but he sizzled home in 53.89 and 26.89, the closing section bettered only by runner-up Imasportsstar (26.61) who enjoyed a pegs run until the turn.

“It was a great run because he was a little big and we thought he’d run out of puff.

“He looks a ready made leader from two on Saturday as the one horse (Subtle Delight) will take a sit.”

Northview Hustler will also be suited more by the extra trip, stepping up to 2138 metres.

“Both Major Cam and Lets Katchmeifucan will be hard to beat, with Major Cam the hardest. But he’ll have to run a good half to catch us. We know what we can run in front.”

Earlier, in the second race, Larry Lincoln also lands a better draw than last week when he could manage only fourth from two on the second row.

Drawing four on Saturday will allow the horse to be driven a little more quietly, says Barnes.

“He just had no luck in the running last week and Hayden had to go too far from home. But he can’t sprint from the 800, he needs to pull out at the 400.”

The long, explosive burst from the back took its toll, with Larry Lincoln’s run coming to an end 200 metres from home, seeing him 8.9 metres from the winner in fourth in a fast 1:53.6 mile rate.

“He’ll go forward on Saturday and find a position and then we can drive him more quietly. The 2138 metre trip isn’t ideal but he’s up to them and he’ll be OK driven colder.”