Wow! 1:53.3: This Girl just keeps getting better and better and now it’s all on for the Oaks

Lincoln’s Girl paced so fast in her Pot Of Gold win at Albion Park tonight she was just a fraction of a second off becoming Sir Lincoln’s fastest ever performer.

Lincoln Farms’ rapidly improving filly clocked a staggering 1:53.3 mile rate for the 1660 metres - and she didn’t do it on the pegs, rather three wider to the death seat, before drawing out to win by nearly four metres.

Trainer Al Barnes was nearly lost for words after watching Lincoln’s Girl, confidently driven by his son Hayden, run one of the fastest miles by a c0 pacer seen in Queensland. 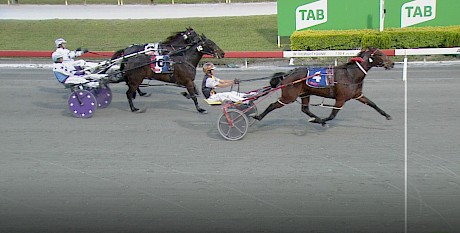 Lincoln’s Girl runs to the line strongly to beat Timeless Appeal and Mister Diamond at Albion Park.“When we got her we thought if we could get her to settle, she’d be a nice sit-sprint filly. We never thought she’d race three wide to the chair and win in 1:53.3. That’s a great time for a filly and she did it tough.’’

No class records are kept in Queensland but you can get some idea of how special the run was by comparing the time top pacer Colt Thirty One ran when winning the 2017 Pot Of Gold - 1:54.1.

When Colt Thirty One bagged the c4-c5 Rising Stars Final last year he was only one tenth of a second faster than Lincoln’s Girl in 1:53.2.

Barnes is trying to stay grounded as he now turns his mind to preparing Lincoln’s Girl for the first of her big assignments, the A$21,110 Redcliffe Oaks (2040m) on June 22.

“She’ll have one more run before then and then she’ll have two weeks to freshen up for the Oaks.’’

“She’s driving well now, and not pulling like she used to, but we now have to start winning over 2100 metres.

“It will be interesting to see what she does when we tuck her in behind. She’s done a bit of work in her last couple of runs and might want to keep charging.’’ 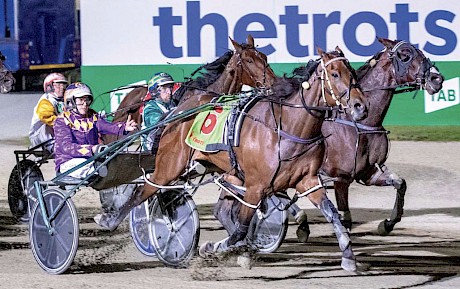 Barnes also knows it will be a daunting prospect taking on Queensland’s top filly Smart As Camm Be, who has won 11 of her 14 starts.

Smart As Camm Be could well be too good over longer trips but interestingly seven of her wins have been over 1660 metres and the fastest she has clocked is a 1:55.7 mile rate.

In her last two starts she won a heat of the Victoria Oaks, clocking a mile rate of 1:57.2 for the 2240 metres and ran seventh, from a horror draw, in Belle Of Montana’s final.

Barnes says he’s in love with the family of Lincoln’s Girl and Lincoln Road, who are out of the late Bob McArdle’s broodmare Tania Tandias.

The Pot of Gold purse was worth A$6321 which, along with her heat purse of A$2100, saw her bank A$8421 for only a single rating penalty. Her career record now stands at six wins from 18 starts.