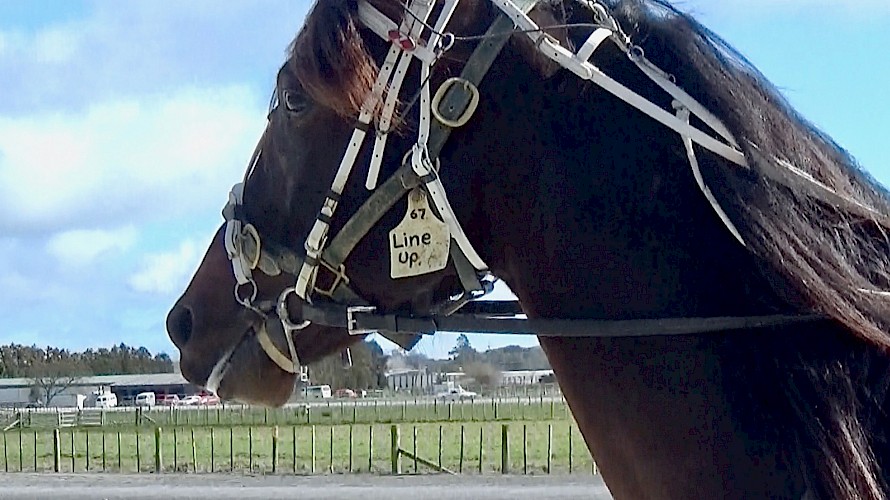 Line Up, pictured at Pukekohe today, is being aimed at the first Sires’ Stakes heat of the season at Cambridge on October 3.

Line Up didn’t win his heat at the Pukekohe workouts today but that didn’t stop top driver Zachary Butcher from raving about his ability.

And in Butcher’s biggest rap for the colt yet, he placed the horse a rung above Perfect Stride and Zeuss Bromac who last week finished third and fourth in the Breeders’ Crown Two-year-old Final at Melton in Melbourne.

“Zeuss and Perfect Stride are two nice horses but he gives you the feel that he’s always got some extra in the tank. Man, he felt nice today. That’s the best he’s paced and he’s got real speed.”

Allowed to settle second last in his six-horse heat, Line Up was still there, three back on the markers, turning for home. 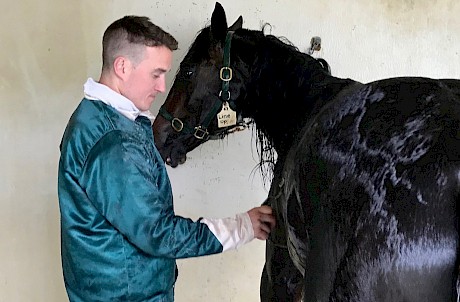 Zachary Butcher takes Line Up’s heart rate after Saturday’s workout.But when clear, he powered to the line to finish four lengths behind all-the way winner Callie’s Delight, with stablemate The Empress a further two lengths back in third.

But what Butcher said next really stamped Line Up’s ability: “It’s a big call to make but I reckon if I’d really chased him up, I’d have caught the winner.”

“It’s hard to explain but there’s such a nice feeling about him.”

Later, as he washed down Line Up, and checked his heart rate at just 73, Butcher revealed it had been an easy run for the horse.

“He’s still growing. For the first half lap he was a bit crabby - but it’s just growing pains - and he paced so much better today (with this hopples pulled up a hole). 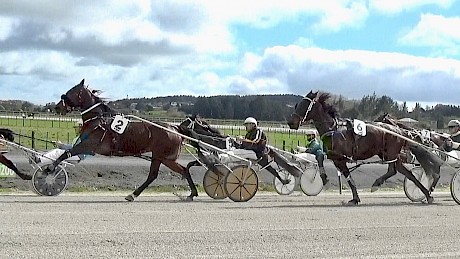 As The Blue Beat gallops turning for home, The Empress swings wider to challenge and Line Up is coiled up on the fence.“We took the block blinds off him today and he was so much more tractable. He travelled well, dropped the rein perfectly, and didn’t want to run with everything.

“That workout will build him up. He’ll trial again next week when I’ll give him a good run.”

Trainer Ray Green looks to have timed his run to perfection with the colt who will have one lead-up race before the opening Sires’ Stakes heat at Cambridge on October 3.

Driver Andre Poutama was also suitably impressed with the run of The Empress whose Australian owners Merv and Meg Butterworth were on track to watch.

One out and one back, Poutama said the mare was initially reluctant to come off the back of The Blue Beat who was going roughly.

“But when it finally galloped on the turn she came off and went to the line strongly in 27.7, so I was quite happy.” 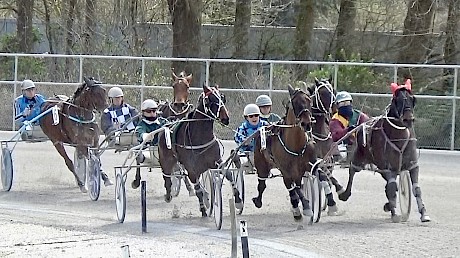 Bettor My Dreamz trails, Just Wing It is in the one-one and star pacer Star Galleria is staying out of it at the rear.Supersonic heat

The Butterworths’ Bettor My Dreamz was also strong when third in an earlier 2500 metre heat which was run at supersonic pace.

The rating 68 and faster pace featured topliner Star Galleria but trainer-driver Steven Reid never allowed him to get into the action in his first workout this campaign - because stablemate Baileys Knight was going so fast in front.

Butcher himself had to abort a mid-race move to take the front on Bettor My Dreamz when learner driver Monika Ranger was unable to slow the leader, instead slotting into the trail.

At the post the John and Josh Dickie-trained Bettorstartdreaming got the judge’s call, half a length in front of Baileys Knight, with a further length and a quarter to Bettor My Dreamz, the trip cut out in a very fast 3:08.7, a mile rate of 2:01.4.

Stablemate Just Wing It was a further two lengths astern in fourth, Poutama saying he was going beautifully until he starting flogging his knee and running out.

“As soon as he hit his knee he couldn’t keep it together. It unbalanced him and wrecked his action.

“It’s like he’s scared because he knows he’s going to hurt himself.”

Green agreed with Poutama that they should reinstate his one-legged spreader, which had been so effective earlier in keeping him off his knee.